So, yesterday I went to the dentist for a cleaning. Just your typical, run of the mill, every 6 months 2 years...cleaning. So, I thought.

I'd been procrastinating on going to the dentist for a cleaning. Not because I hate it or anything, but just simply because procrastinating is what I do! Then on Monday morning I work up and the gum near one of my wisdom teeth was hurting...and that gave me the kick in the butt I needed to finally call. My cleaning appointment was set for that Thursday (yesterday).

A little background on my pearly whites. ;) I'm pretty lucky all things considered. I literally had NO wisdom teeth in the top of my mouth. They just never formed. They must have procrastinated too long. haha. I had braces when I was in high school, and because my teeth were crowded at the bottom, they pulled two lower molars. That made just enough room for my bottom, and only, wisdom teeth to come in.

So, my wisdom teeth have been happily hanging out in my  mouth for...shoot probably at least 5 years now? They never bothered me. Though they weren't in completely. They were lower set than the rest of my molars and like 1/4 of each one was still covered by gum.

Enter Thursday, and I go to the dentist. I told him about my gum hurting (which hadn't stopped for 4 days!), and they did x-rays, etc etc. I figured they'd want to pull my wisdom teeth at some point. He tells me that the one is infected because a cavity had actually formed underneath the gum that was partially covering the tooth (lucky me huh). Then he mentions that he can "just go ahead and get that done for me today"...I'm like TODAY???

I could have said no and come back in a week, but that would have just been another week of my tooth hurting. So, I went with it. I'll tell you...I was terrified! Which is very unlike me for the dentist. I'd had teeth pulled, cavities filled, and none of it ever made me nervous....but I totally was! Tensing up any time they did anything, and I swear that laughing gas must have just been for psychological purposes because it didn't seem to do anything...except make me look like a super model! bahahaha! 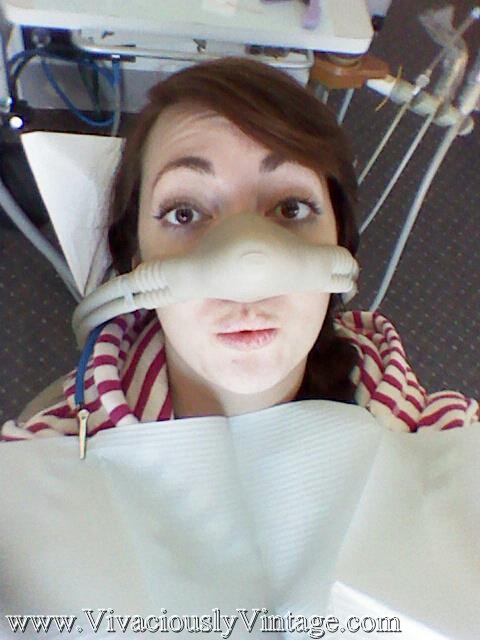 Then, of course, my left side numbs perfectly...but the right side doesn't get numb at all! So, that just makes me even more freaked out anxious....because I'm remembering a friend's story of having a tooth pulled that was infected and feeling everything! I'm laying in the chair terrifying myself even more! Well, on the 11th shot he switched to a different kind of numbing solution that only deadens the tooth itself. So, I still didn't feel numb...and was still freaking out in my head repeating the agonizing tale that my friend told me about her tooth in my head.

While we were waiting on the numbing medicine to take effect, he fixed a very small chip I had on my front tooth (it was small enough that nobody noticed it, but it really bugged me!) from biting my thumb nail. Can you believe that? I bit my natural (not the crazy hard fake ones) nail and it chipped my tooth!!! And he filled a small cavity.

Then...it was time....and, naturally, he's one of the dentists who are like "Are you ready?" OMG don't ask me just do it...lol asking just adds more foreboding to it for me! Really, all I felt was a bunch of tugging and that he wanted my mouth open way more than it would go. Because the shots went through my jaw muscles it felt like I literally couldn't open my mouth more than just a tiny bit. The first one came out easier than the second. Turns out, both of the roots on the teeth were curved....like a hook. Ouch. 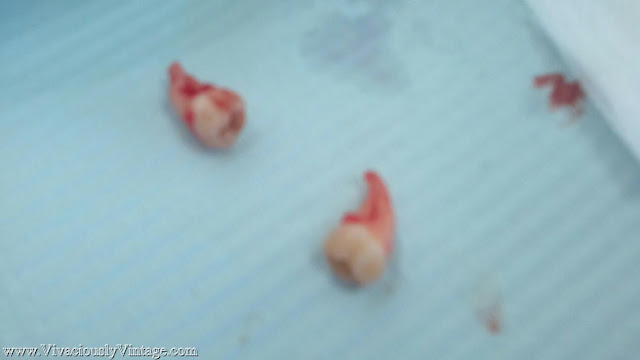 Then they asked if I wanted to keep them!! I'm like "Um, what would I do with them...put them on a necklace??" haha. Luckily, I took this photo on my phone so it's blurry. Somebody said that they looked like shark teeth! haha RAWR!

Well, last night I was pretty miserable. I swear those pills they gave me were just for psychological purposes, also! I guess around 11pm I was feeling better, though it still hurt. That goes for today also. I guess I can eat normally now, but I'm sticking to milkshakes, mashed potatoes, and soup. I did brave it and eat a piece of bread with honey butter (I couldn't resist the honey butter!)...but I chewed it soo slowly and mainly with my front teeth, like a rabbit!

I go back in a week to get the stitches out. Let's just say that I'm glad it's over with! And while it still hurts, I'm so thankful that it wasn't worse! Like impacted awfulness that requires surgery.... /shudder! Happy teeth! 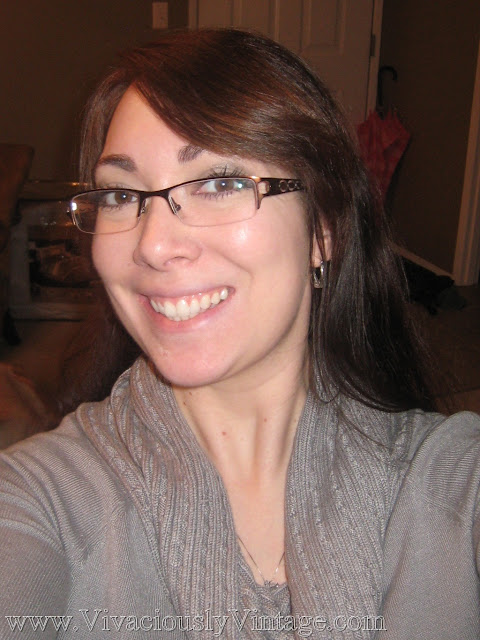 Have y'all had your wisdom teeth out? I think the worse part for me was that I wasn't expecting it or prepared!