Kiddo turned 11 on December 12th. Yeah, I don't know how I ended up with an 11 year old either...oh wait - I remember how that works! ;) It really sucks having his birthday so close to Christmas. Mainly, because the most he's ever had show to a party in previous years was 2 kiddos. Yep. Also because of $ and I'm in a Christmas decorating frenzy...then I have to throw a birthday party in the mix! I swear I'm going to switch his celebration to the spring time...!

He's super into Minecraft and wanted that as the theme for his birthday. First, kiddos entered through a nether portal into the party area. I just bought a bunch of streamers and taped them from the ceiling. Yes, my back was hurting later that night from all the up and down on a step stool 50 times! 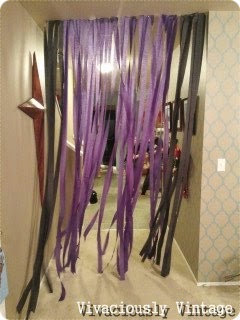 I DIY'd an Enderman pinata and a Minecraft spider. Both of them were relatively simple. I just spray painted 2 boxes black. The Enderman pinata was taped up, filled with candy, adorned with a few streamers, and hung from yarn. That didn't last long. 2 whacks and that string broke. Then they just went to beating it to a pulp on the floor...with a DIY'd wooden Minecraft diamond sword, of course! 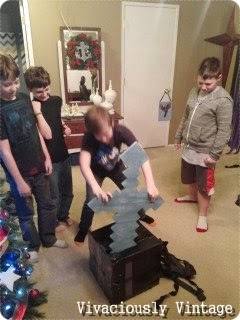 I used pipe insulation for the spider's legs. I just jabbed a few holes in the side of the painted box with scissors and stuck in the pre-cut "legs". Red construction paper served as the eyes. Thinking of saving this for a cool Halloween decoration, too. :) You can see him on the couch in the next photo.

What's a spider without his web? This is the most fun game at the party! Take a different color yarn for each child and run it crazy all over the room. Over lights, under furniture, around and back again. The activity begins with a pencil with the yarn tied around it. They go through the maze wrapping their color around the pencil until they reach the end of the line. Last year, at the end they got their goodie bag. This year I made it a race. First prize $3, 2nd $2, and 3rd place $1. The downside to that is, after the first 3 are finished...the kids lose interest and don't want to finish. Oh well, I gave them scissors and had them snip all the remaining yarn and clean it up for me. They seemed to enjoy that, too. lol 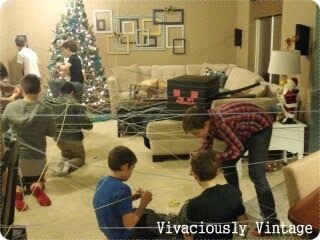 I also made a Minecraft pin the tail on the pig. All it took was a blue poster board and some pink & red construction paper. It was simple to make. I had them all write their names on their tail when it came to pinning time. Now, I didn't want a bunch of tiny holes in my wall - so, I just had them use tape. It was really fun to watch. I let Jeremy choose the winner since he didn't watch the game. I think I gave that kiddo $2. 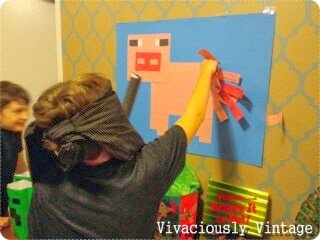 We also played clap hide and go seek. LOVE this game. So, the person who is "it" has to be blind folded. They basically feel their way around trying to find everyone else. The only saving grace is they have several claps they can use. Standard is 3, but since we had 10 kids playing I doubled it to 6. When the "it" person deems necessary, he'll say "clap". Everyone hiding has to clap loudly to give the searcher an idea where they are hiding. I did guide them some. Very general, though. Like I'd say they were entering the living room, or they were walking towards the dining table - just to give them a means of grounding where they were in the room. I think this might have been their favorite game. They even played it the next day on their own! 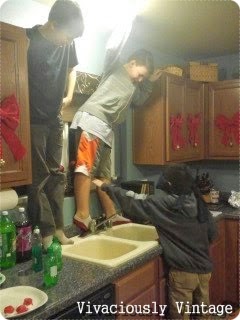 Oh, food! Of course there was the 2 bags of candy that I put in the Enderman pinata. That ended up ALL OVER the house! I also made chocolate chip cookie dough Enderman truffles using this recipe and tiny slivers of fruit roll ups for the eyes. I made the cake to look like an actual cake from Minecraft. I made green jello cut into squares to mimic Creepers, and the small bottles of Mountain Dew served as "creeper juice". I also made "mushrooms" from the game. They were just big marshmallows topped with red frosting. Of course, we ordered pizza for dinner. Mmmm. 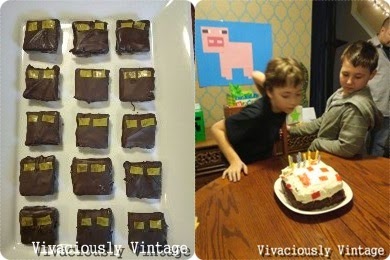 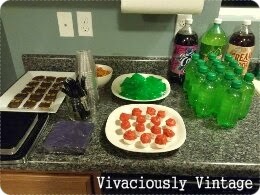 There were 10 kids total. I think only 8 spent the night...what am I talking about?? ONLY EIGHT!?!? lol. Overall they had a blast with the games I planned, but they also entertained themselves with plenty of video games and movies. After staying awake pretty much all night long, I sent each kiddo home with a Creeper goodie bag. I just bought some green paper bags at the Dollar Tree and took a huge sharpie and drew Creeper faces on each one. The boys were wanting them as soon as they arrived, and I caught several sneaking peeks! You can see them on the left side of the photo. 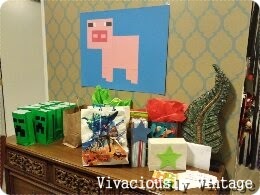 The best part of all this was hearing the whispers of little boys telling one another that this was the best birthday party they'd ever been to! Made all the stress and work worth while. Kiddo was very thankful and had a ball!