So, I've kept our master bedroom hidden for quite some time. Once upon a time I had a this image posted in our "Tour Our Home" tab. Lol, what a horrible photo! I've learned a couple things about photography since then (though not many - it's a work in progress). 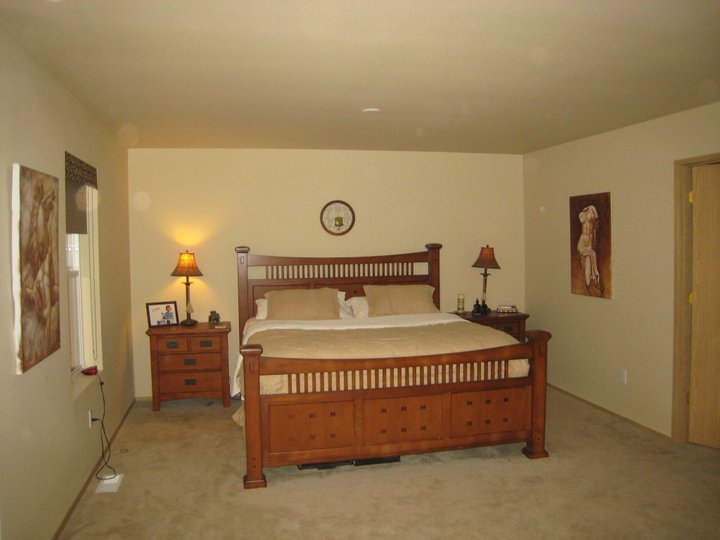 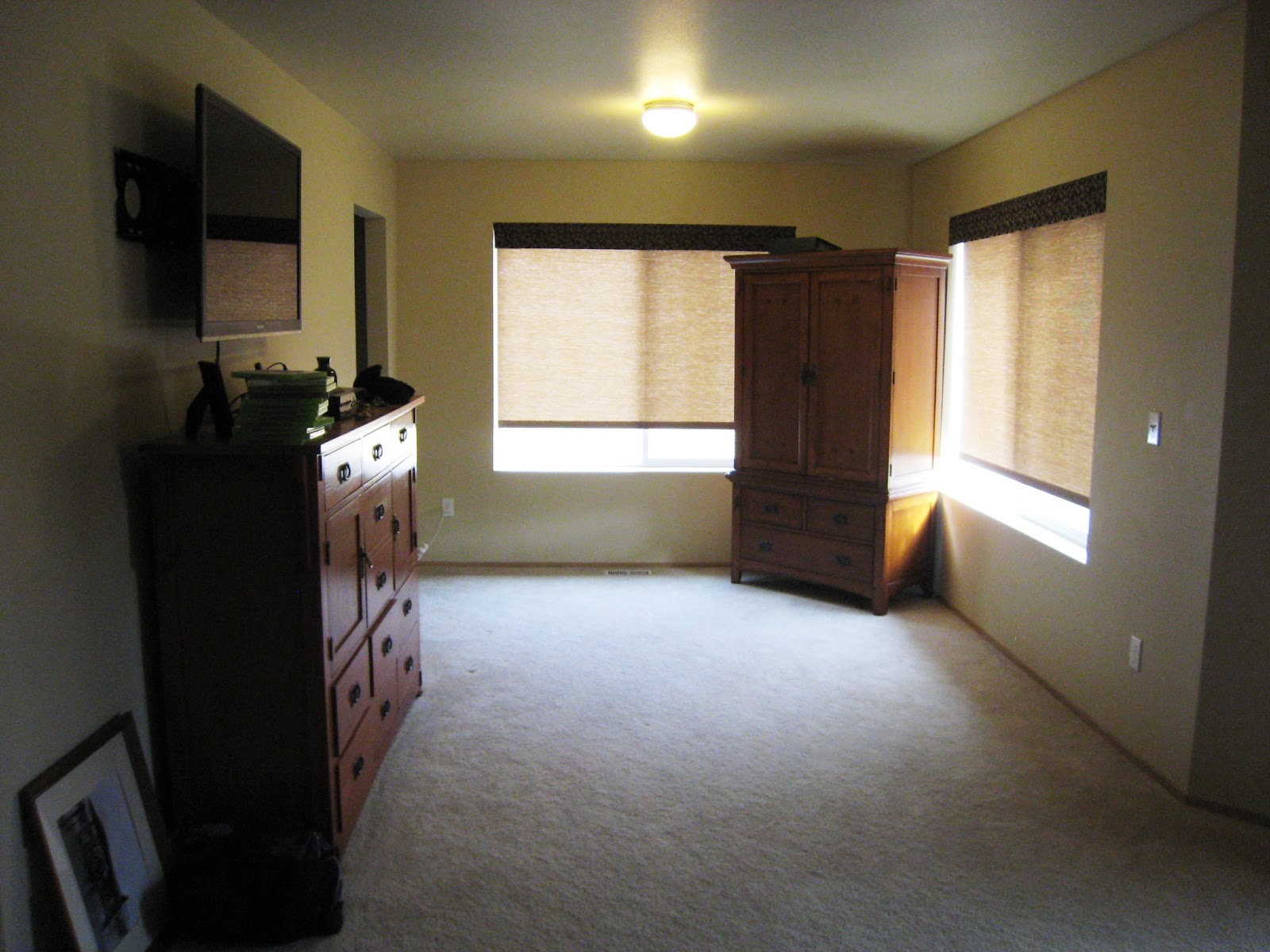 I've hardly done ANYTHING in our master. I guess because I was completely clueless about what I wanted. I think the first official project was the DIY Love Arrow Clock. Doncha just love it? 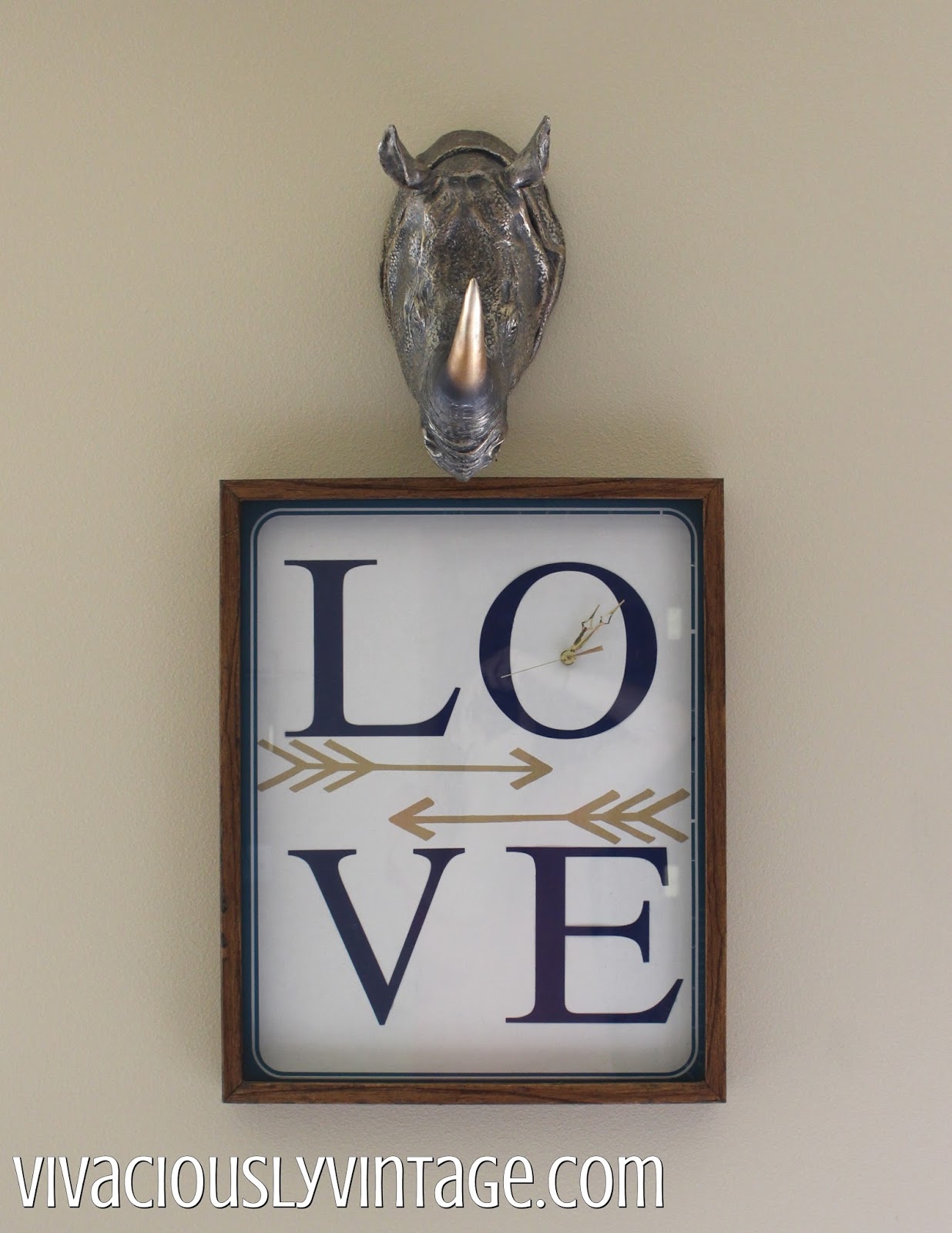 My husband actually took it upon himself to buy a new bedspread. Well, it's a duvet cover with the insert. I decided that I wanted some white; so, I just used the white comforter and folded the blue duvet at the end of the bed. Glad that clicked in my head because I was actually just going to go buy a new white comforter. Yay for saving $50+! 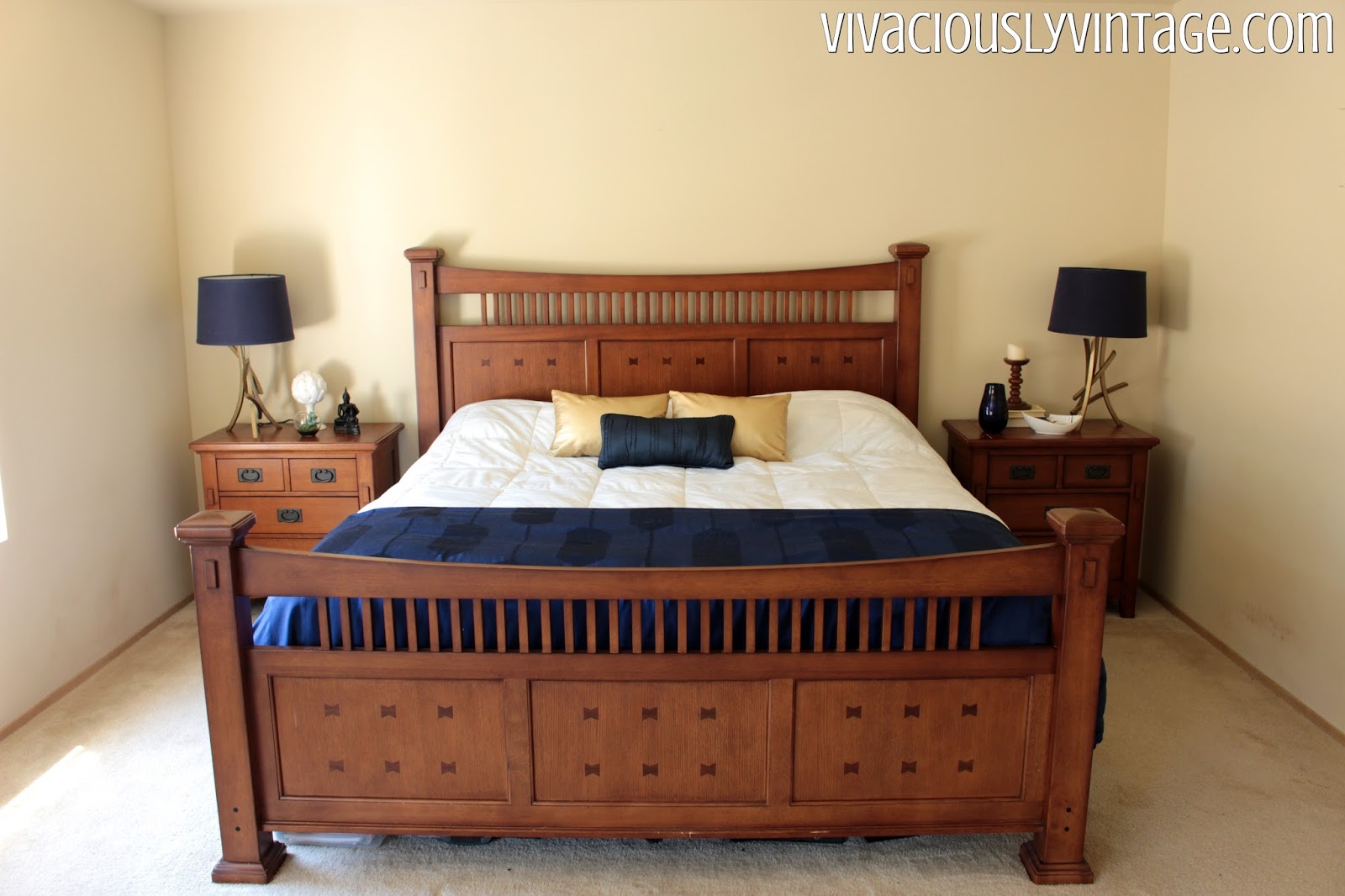 I bought these awesome Nate Berkus lamps from Target, psh, probably 2 years ago now. At the time, I didn't want dark lamp shades - I wanted white. So, they sat in a closet forever until I found large enough shades that weren't $25 each (as it was I paid $50 a pop for the lamps - that's so not like me!). I recently broke down and just bought the navy ones that they had paired with the lamp at Target. That's $75 per lamp, I know - kill me now. But I do love them! Pair that with some new accessories, and you've got happy nightstands - minus the nightstand, I don't really like the furniture in our room! 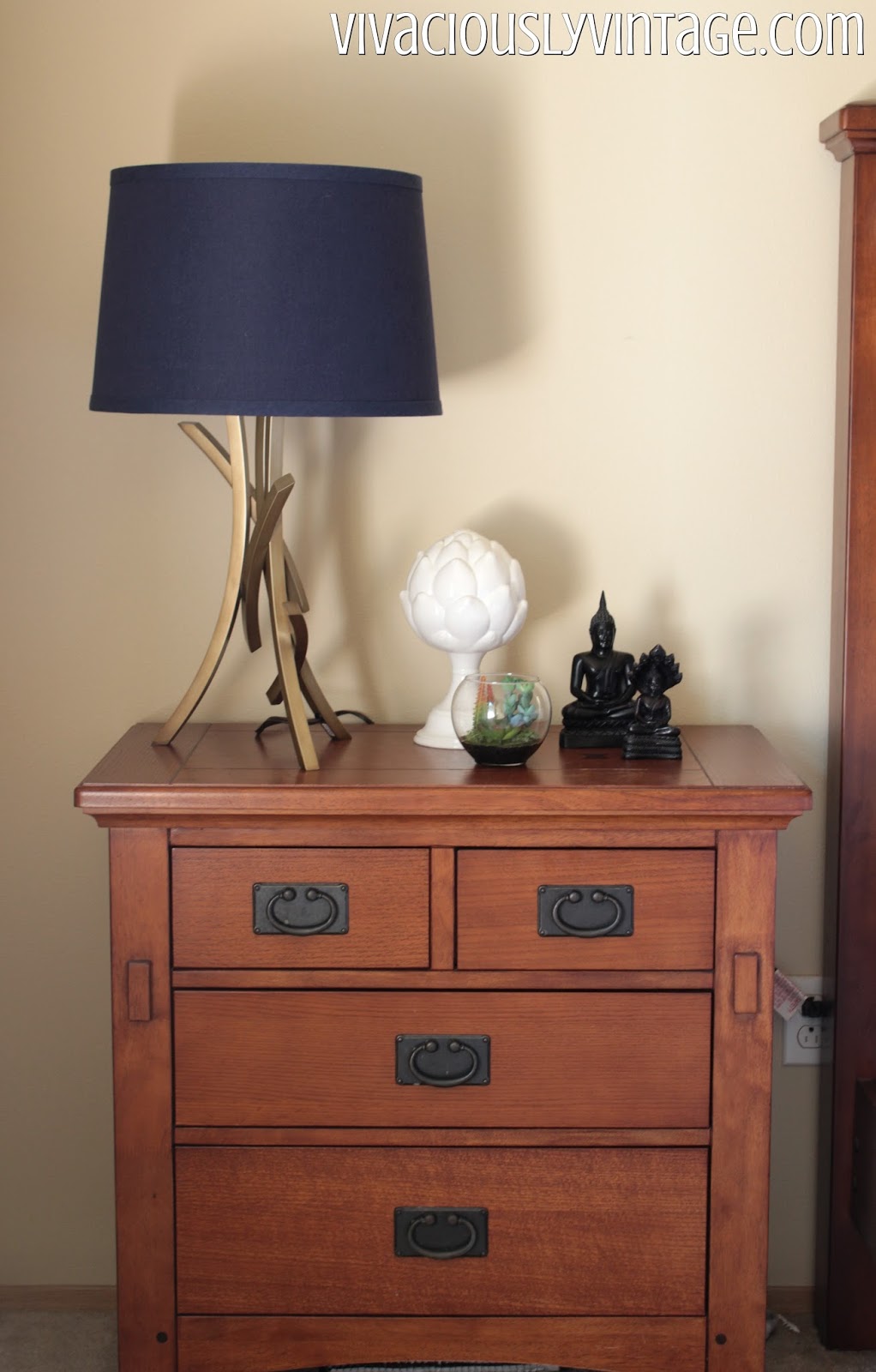 There that's better, no nightstand. ;) 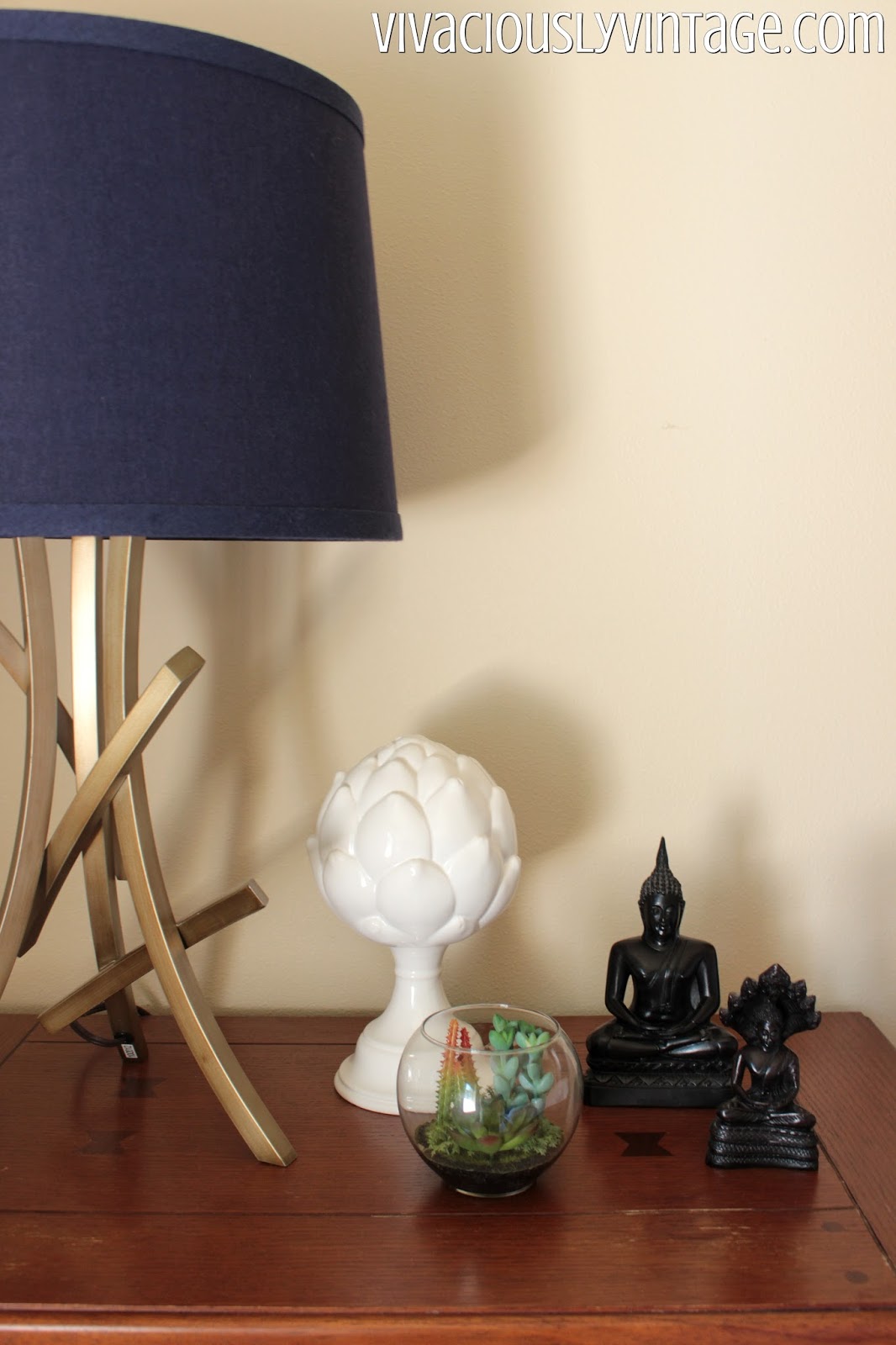 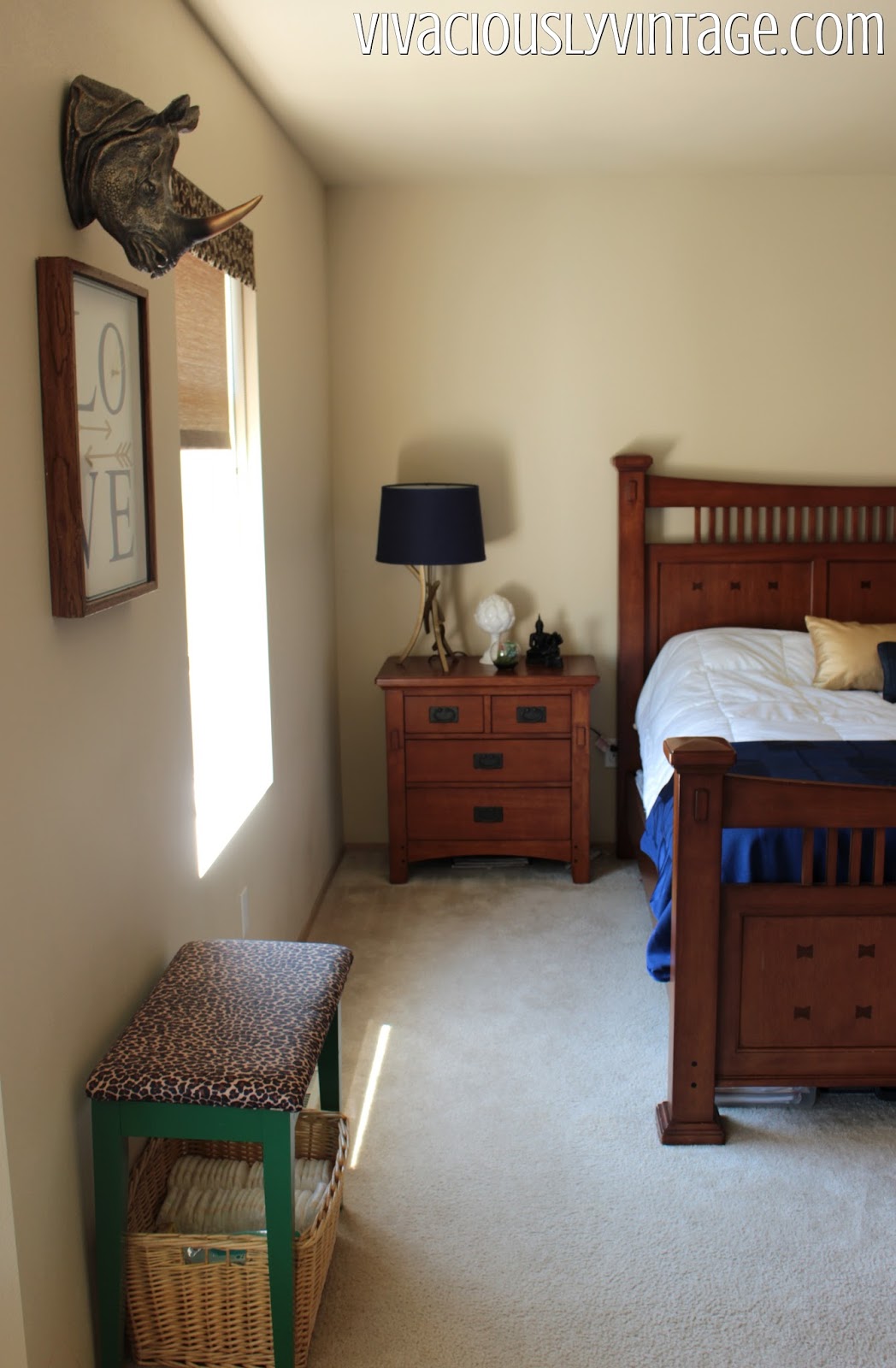 I'd love to get ALL DIFFERENT furniture in here, but that stuff was hubby's before we even met. He's very territorial of the things he had before me. Like he doesn't want to get rid of anything ever. He also won't let me change it. I'd love to paint that HUGE chest under the TV...maybe emerald or navy. Nope, not a chance. I DO plan on darkening the stain on it and the nightstands. I think that's something he's okay with. He just isn't too keen on painted furniture, in general. The bed though, that's got to go. I see a DIY headboard in my future. Sorry honey, that's compromise! ;)

On the other side of the room, I pulled up the chairs that used to be in our office. If we end up staying here and not transferring, those won't be permanent (is anything ever in my house?). I'm thinking a cute loveseat or smaller couch. I will also be confiscating his larger of the two closets! I know, why is it not like that already?!?! 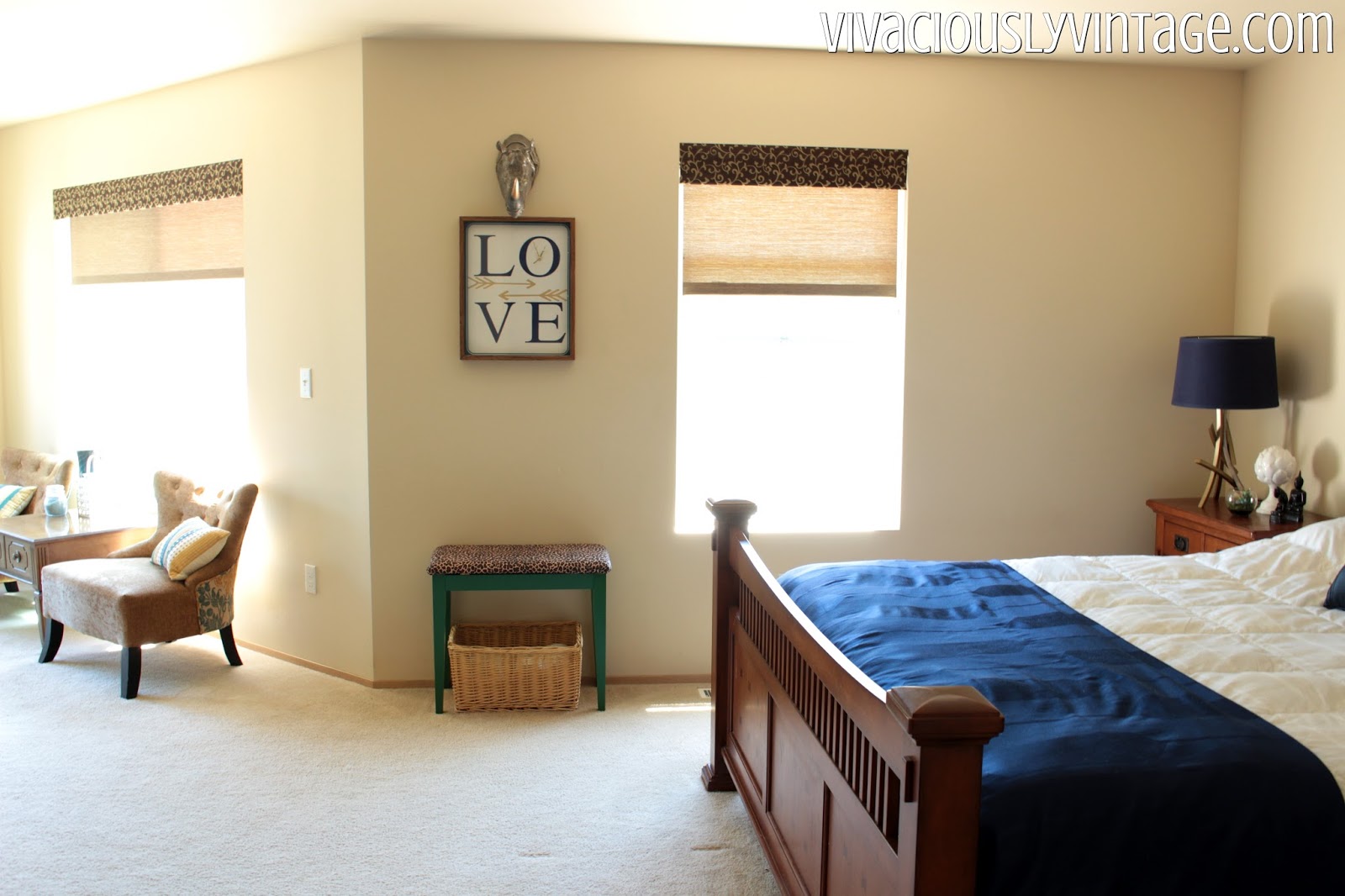 I do love that our TV rotates out of the wall to face the bed. Hubby gets irritated with me when I lay it flat on the wall! I guess pulling it out is hard. ;) Though, I think it's mainly that he'll be in bed ready to watch before he realizes it's not in the correct position. I can see how that's irritating. If he stops leaving his dirty laundry on the floor, I'll stop pushing the TV flat to the wall! hehe 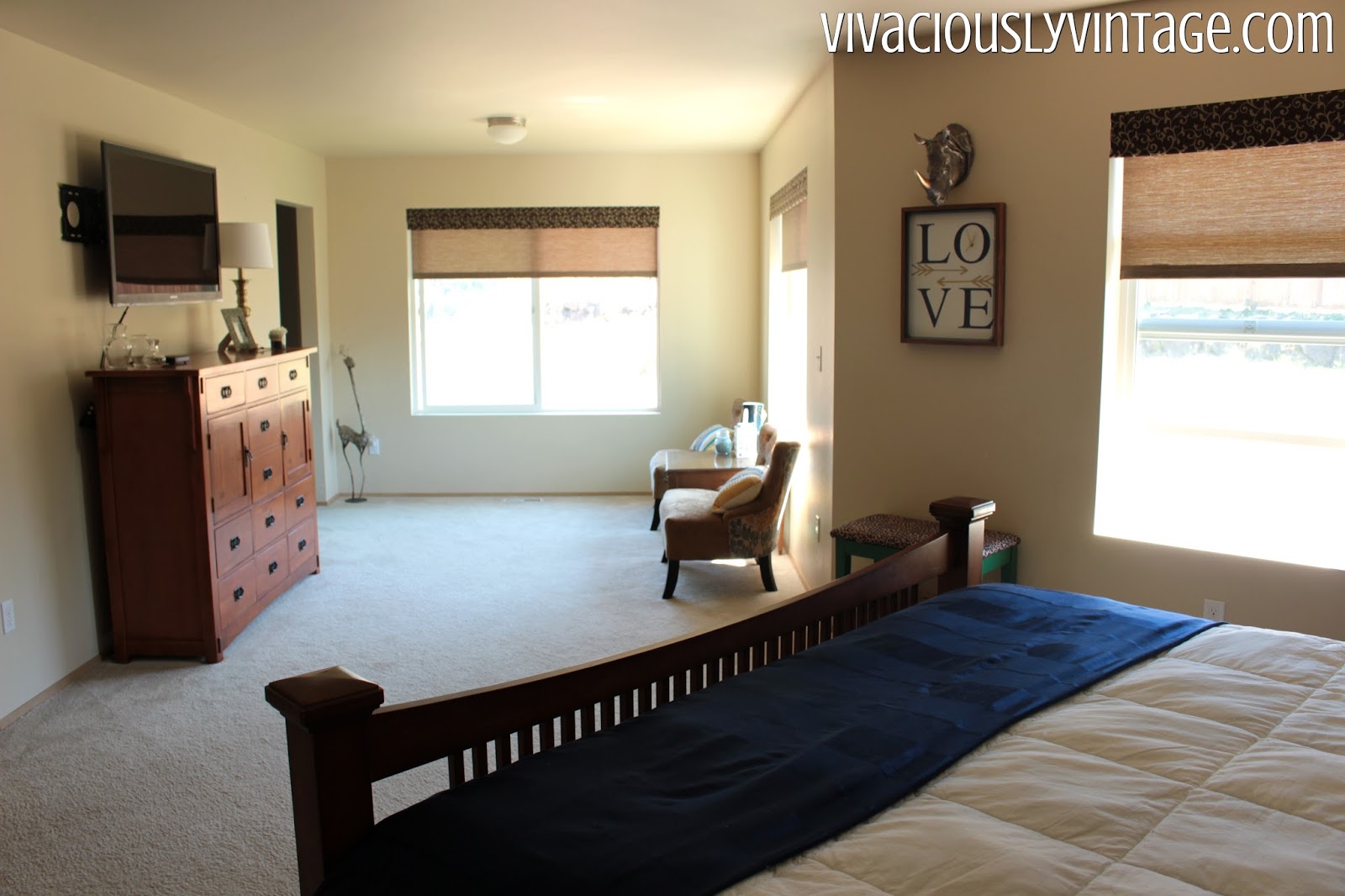 Snagged this lamp at Goodwill. Yep, only $1.29! I just couldn't paint over that authentic brassy finish! 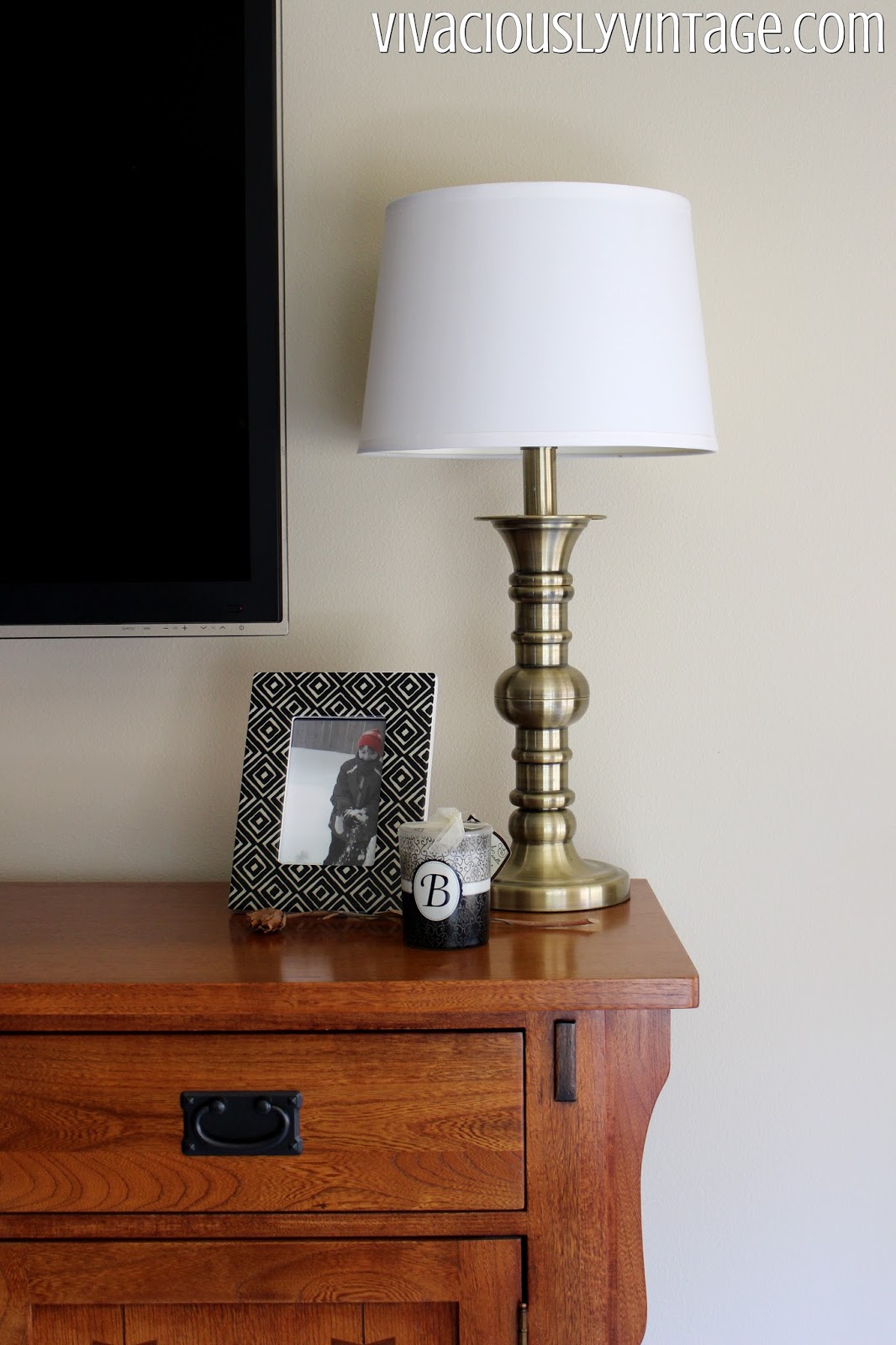 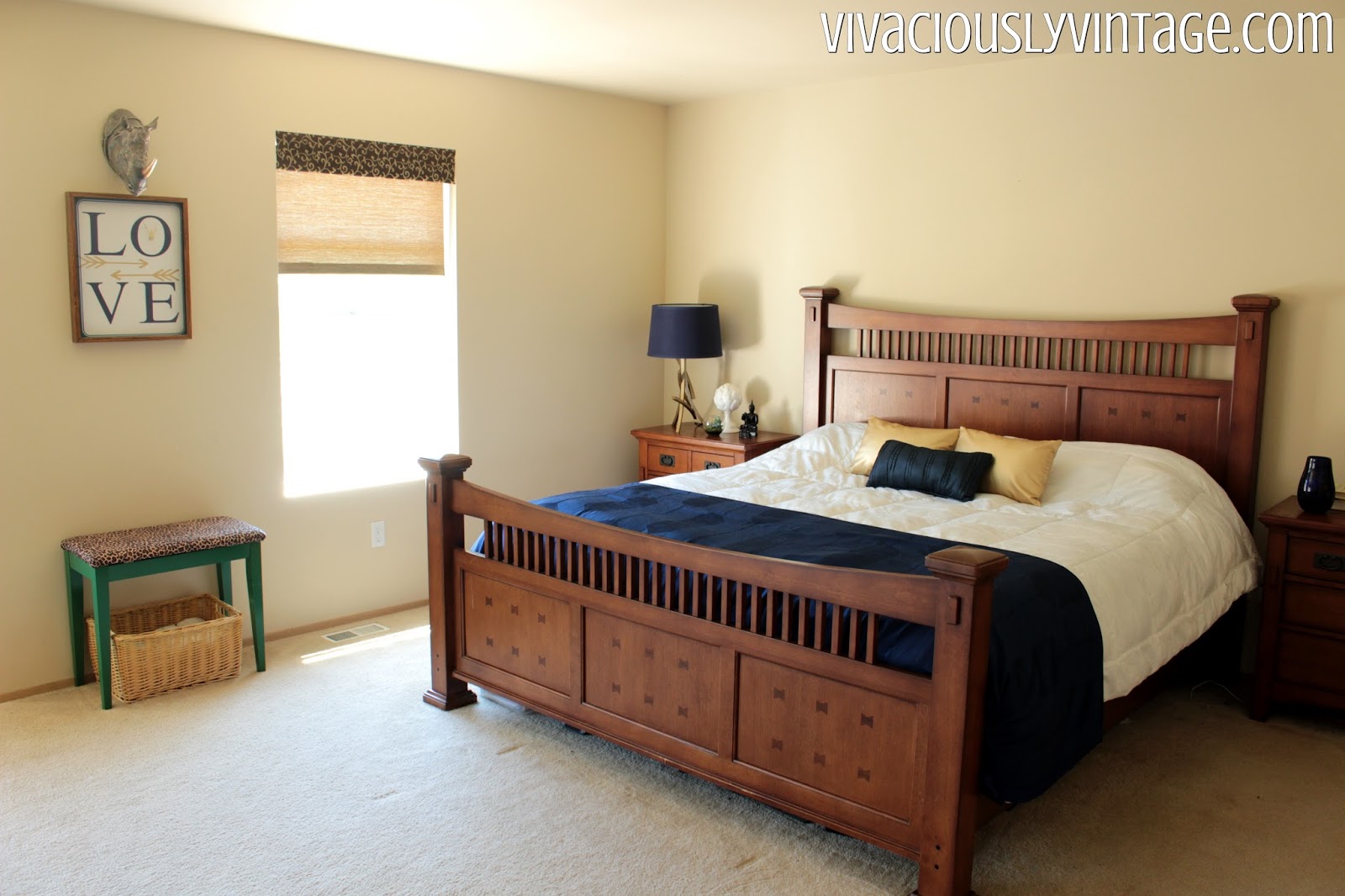