I try to sell a lot of my stuff through Facebook groups. I've never had a garage sale in my life, and it kind of terrifies me! This way I can just post photos, and people want them or they don't. Anyhoo, I sold Ethan's old Transformers bedding to a lady from one of these said groups, and she contacted me about a week later wanting a SUPERHERO dresser after seeing my bloggy work! 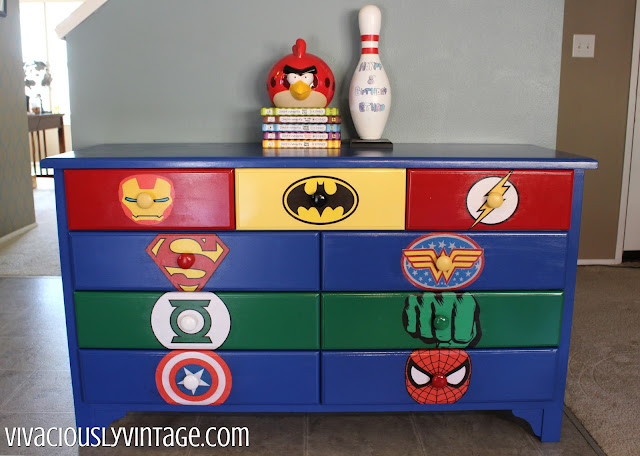 This was the target. The mission? Superheros fit for a 4 year old superhero in the making! :) 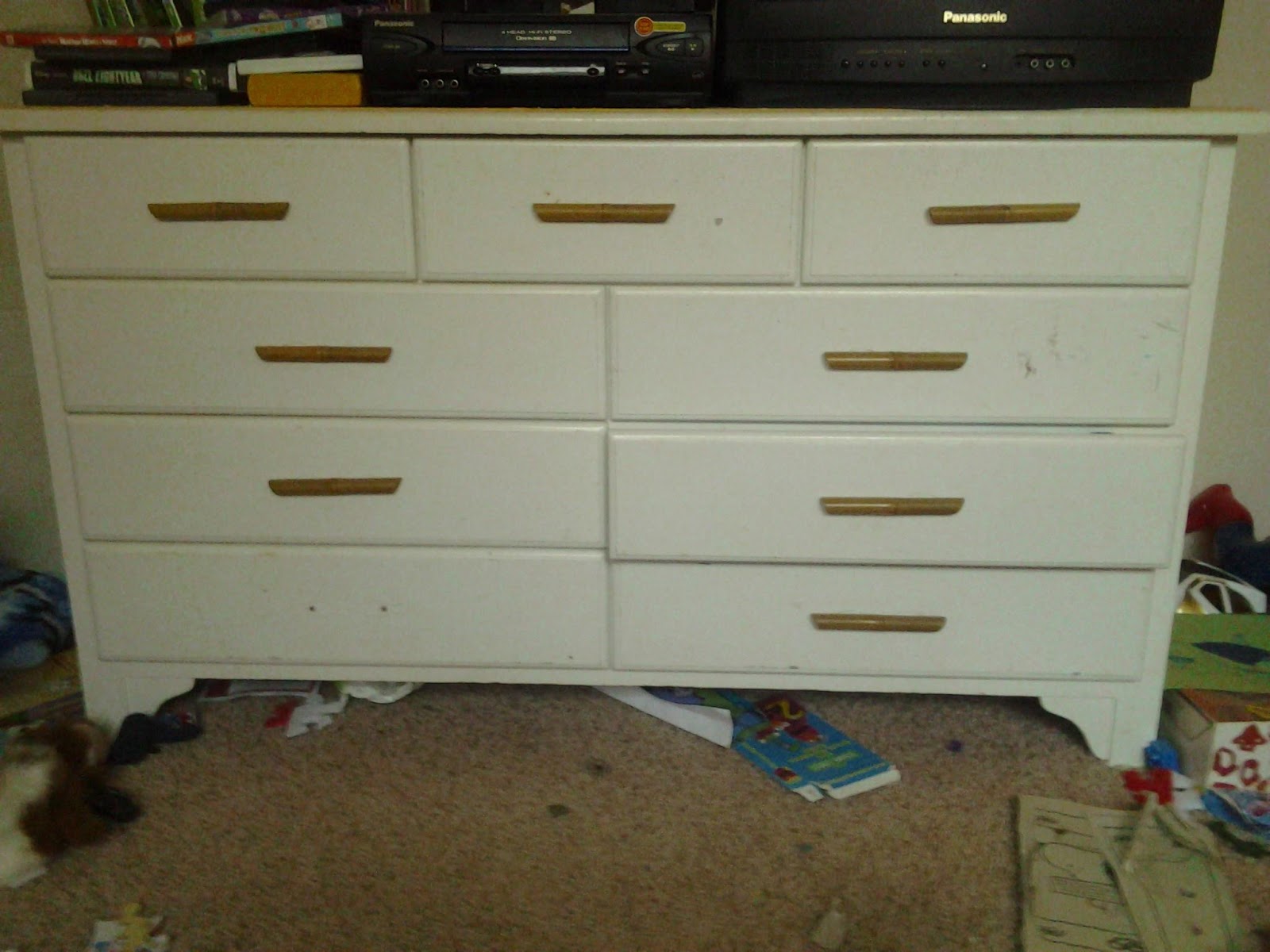 We talked a bit about what she wanted, and I showed her some photos I thought would be good for inspiration. This is the one she liked. So, I used my awesome (sarcasm!) editing skills to come up with a specific idea for her dresser. 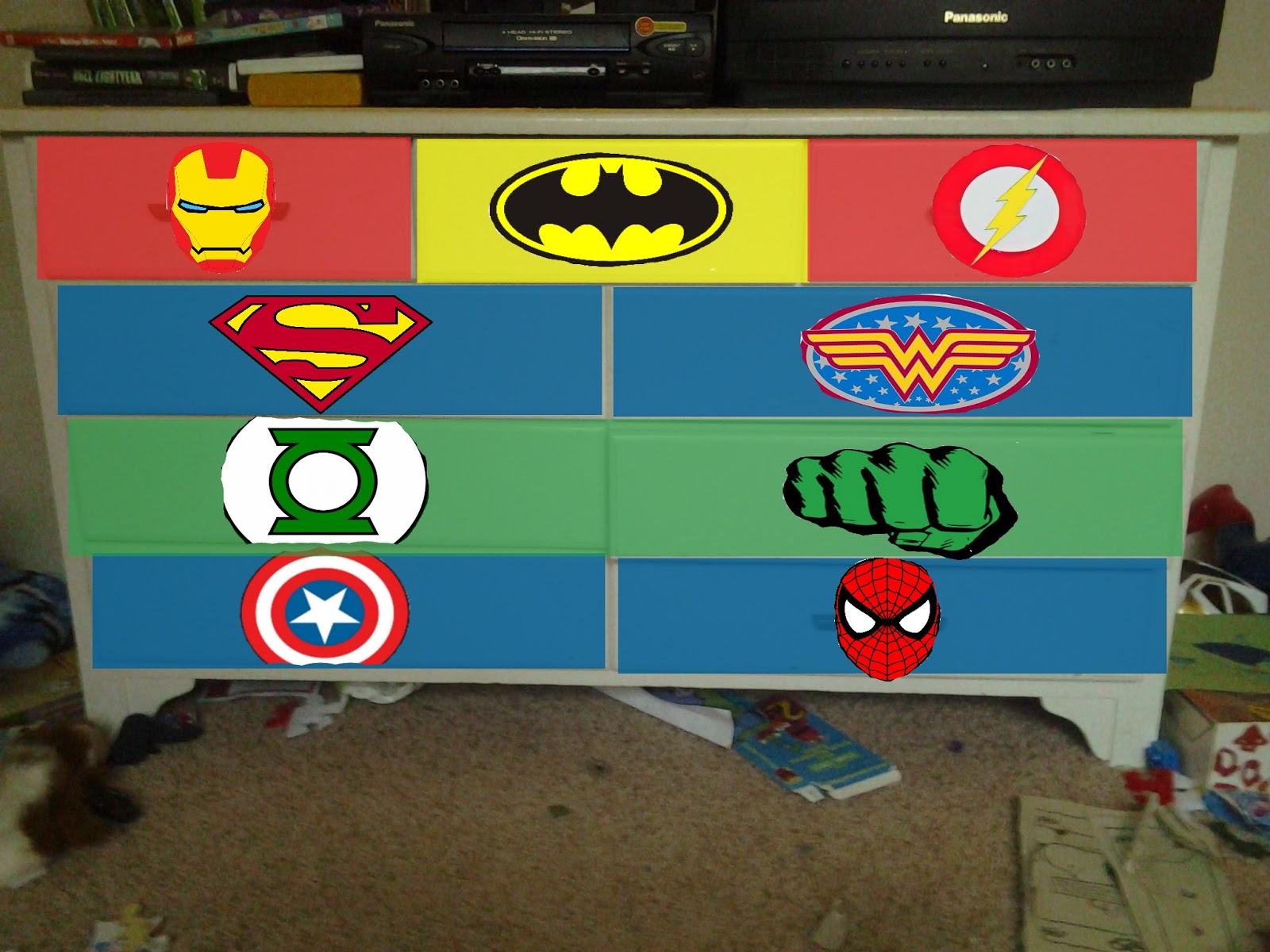 I like to think that the finished product looks WAY better! ;) 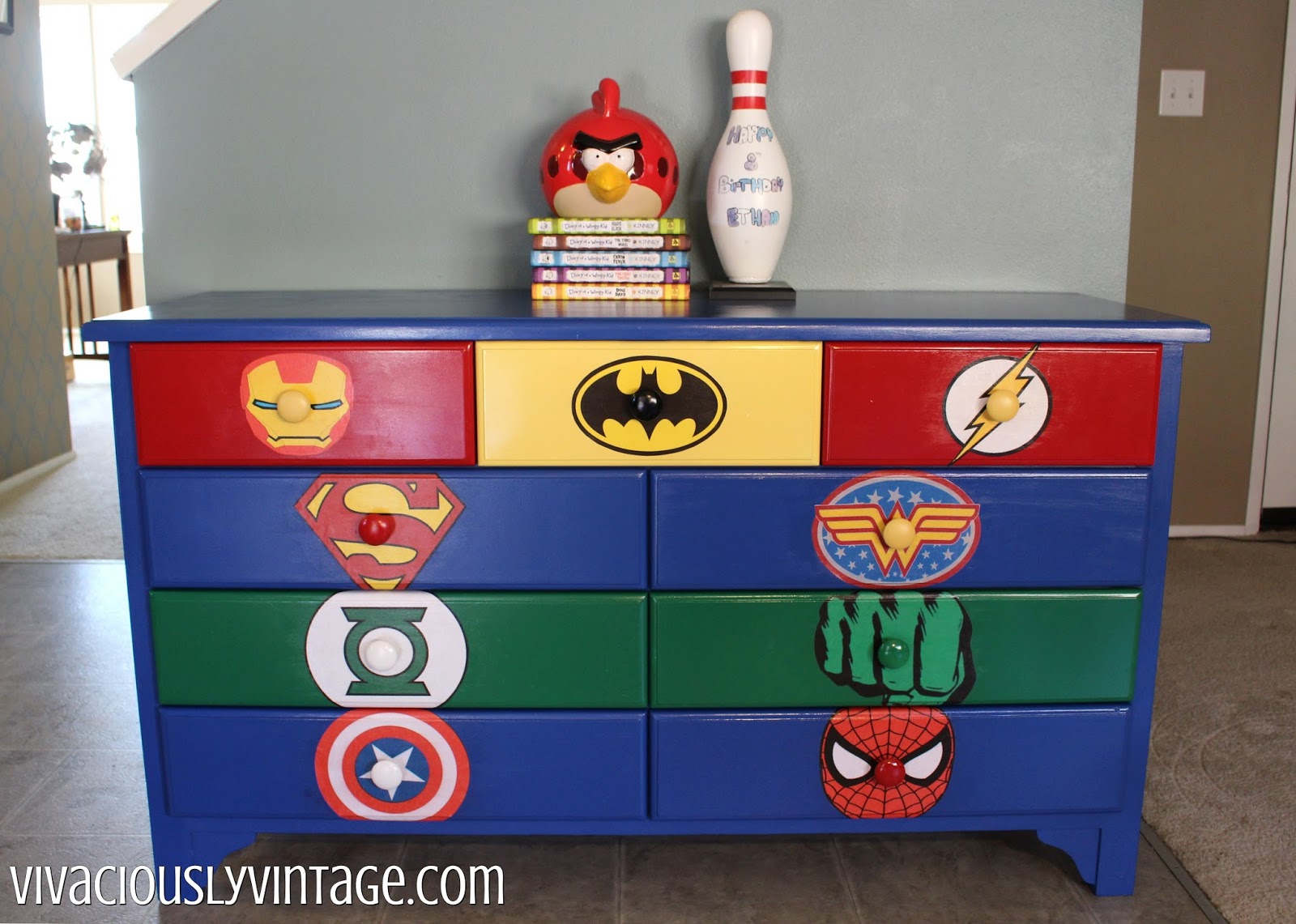 I did choose to sand this dresser because it was SUPER shiny. I was worried that, even with the bonding primer I use, it might not stay so well. I aired on the side of caution, sanded, primed, painted, and topped the whole thing off with polycrylic

(after the decals were on). 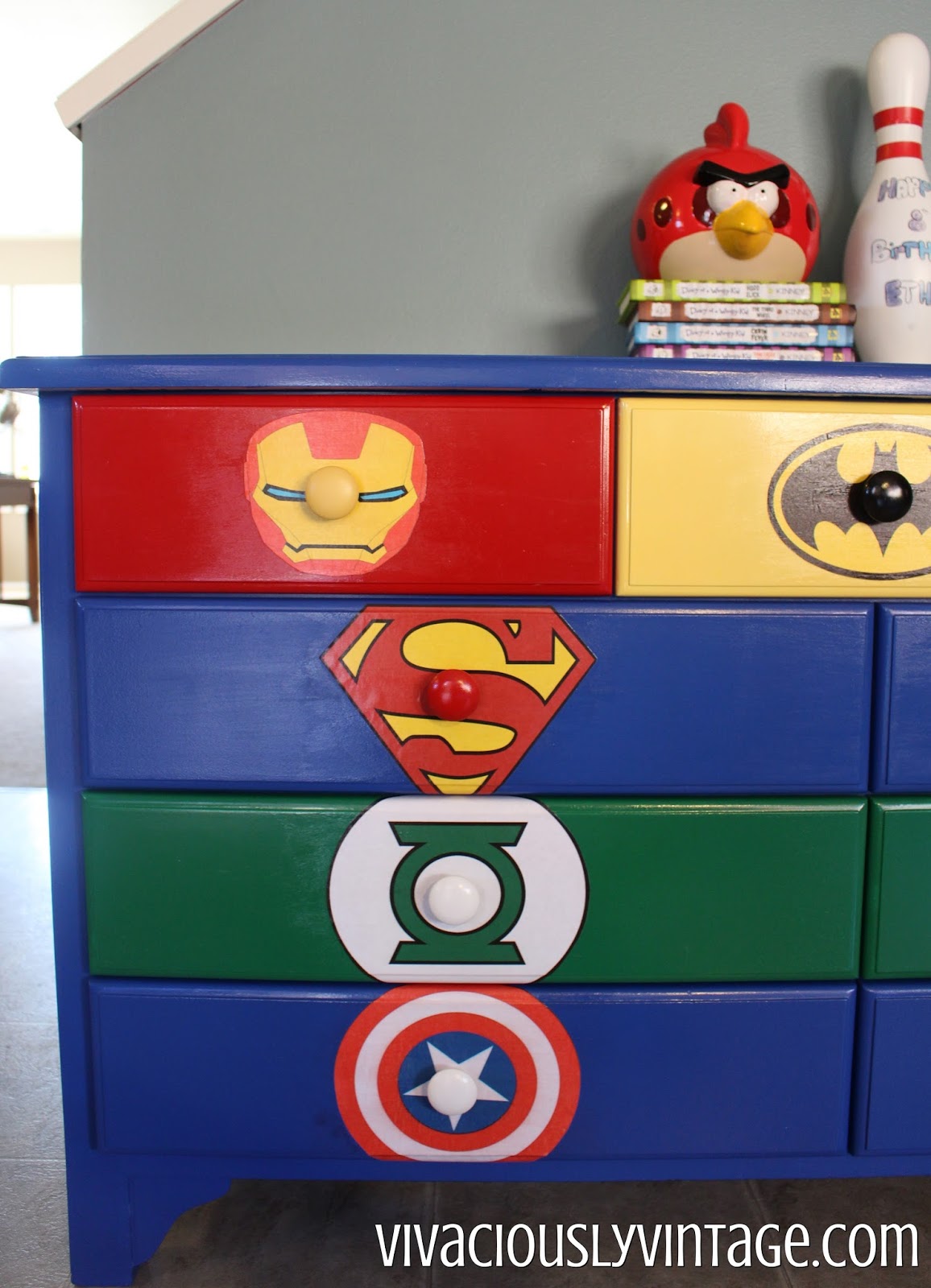 to cut out the silhouette of each superhero on coordinating cardstock and just have that inside each drawer. However, the insides were very marked up; so, I nabbed some Avengers paper to cover the majority of each drawer. 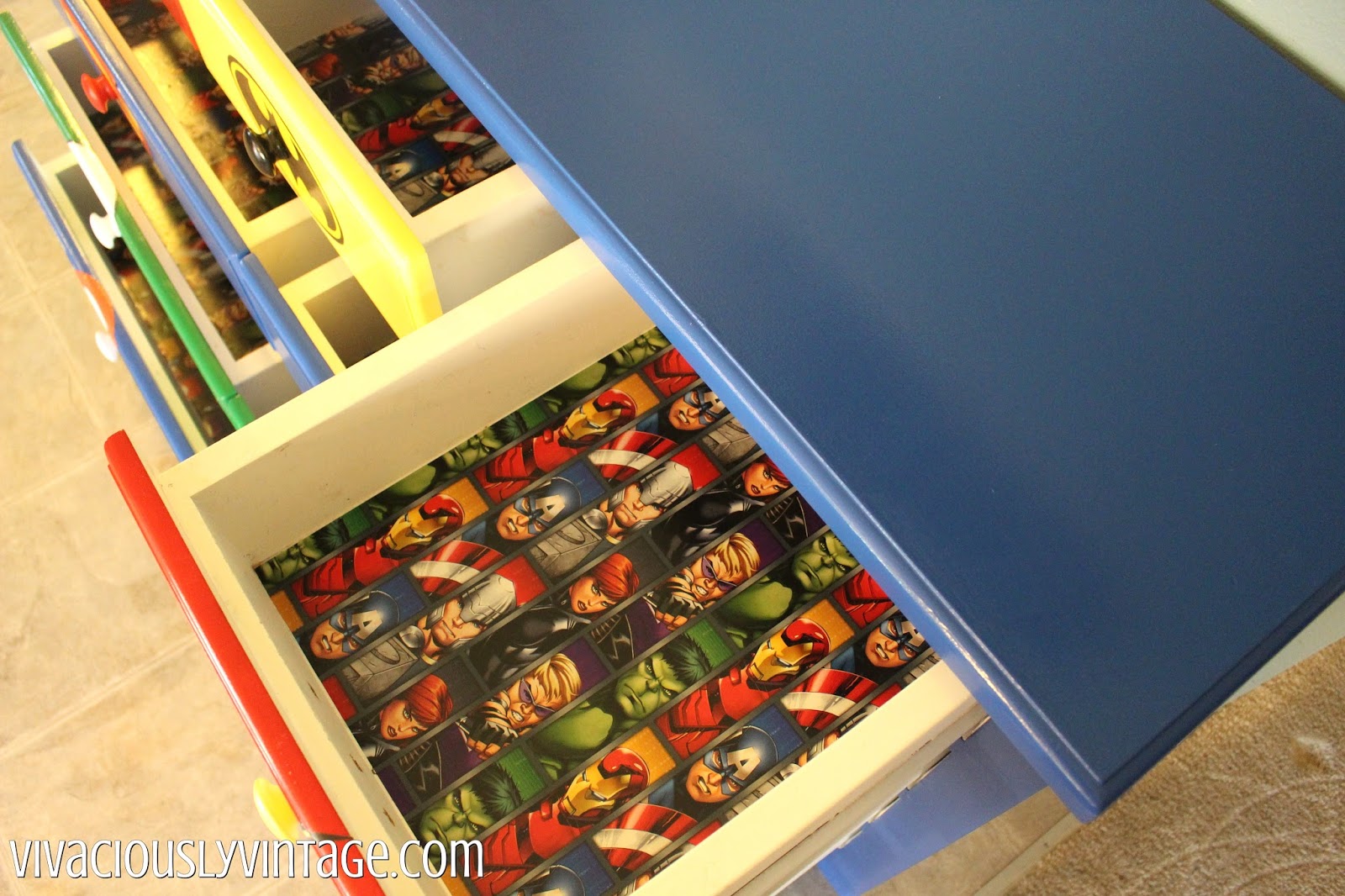 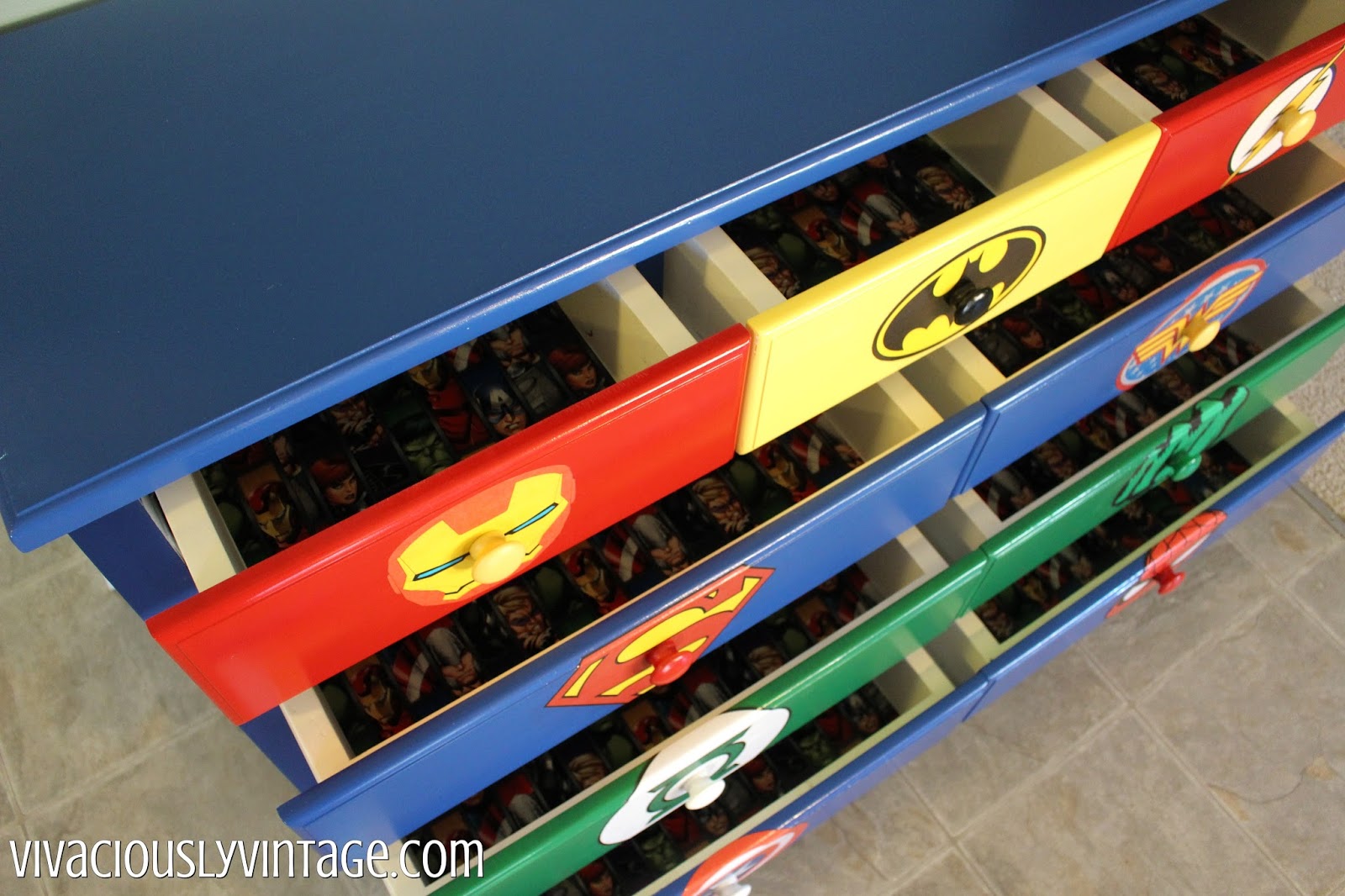 The decals were relatively simple...after a bit of trial and error! All it took was printing and cutting out each image. Then I used spray adhesive to adhere one to each drawer face. I was sure to top off each image with modge podge for hardness and protection. I know normally that you just use modge podge only to adhere and protect....but it kept wrinkling and looking awful. I have never had good luck with using modge podge as the base. Operator error perhaps, but it took me having to redo 2 before I switched to the spray adhesive base. 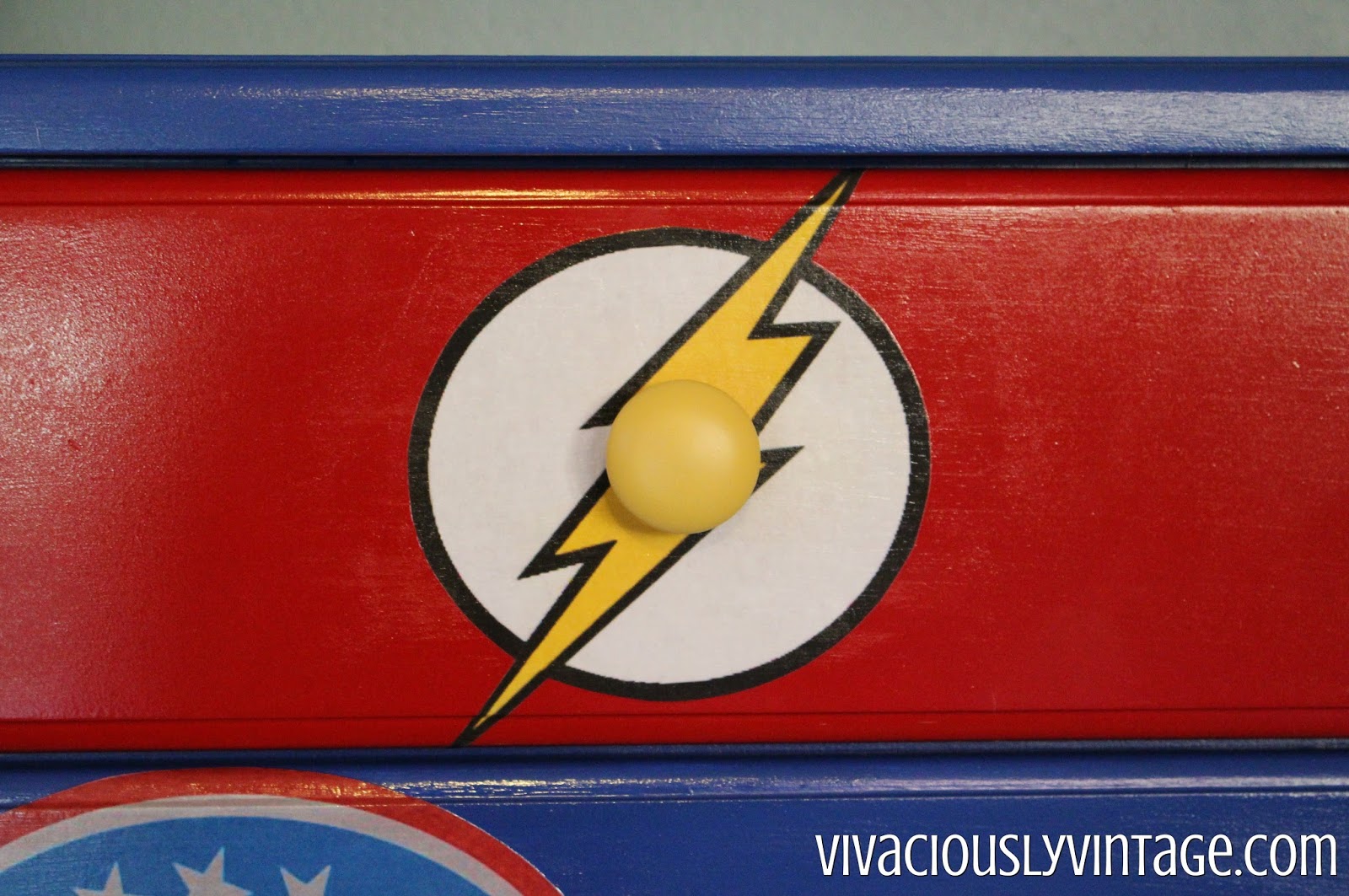 It looks WAY better than if I tried to hand paint it all - not to mention faster. I probably could have hand painted it, but it wouldn't have been pretty, symmetrical, and perfect. That would have made me unhappy. :( 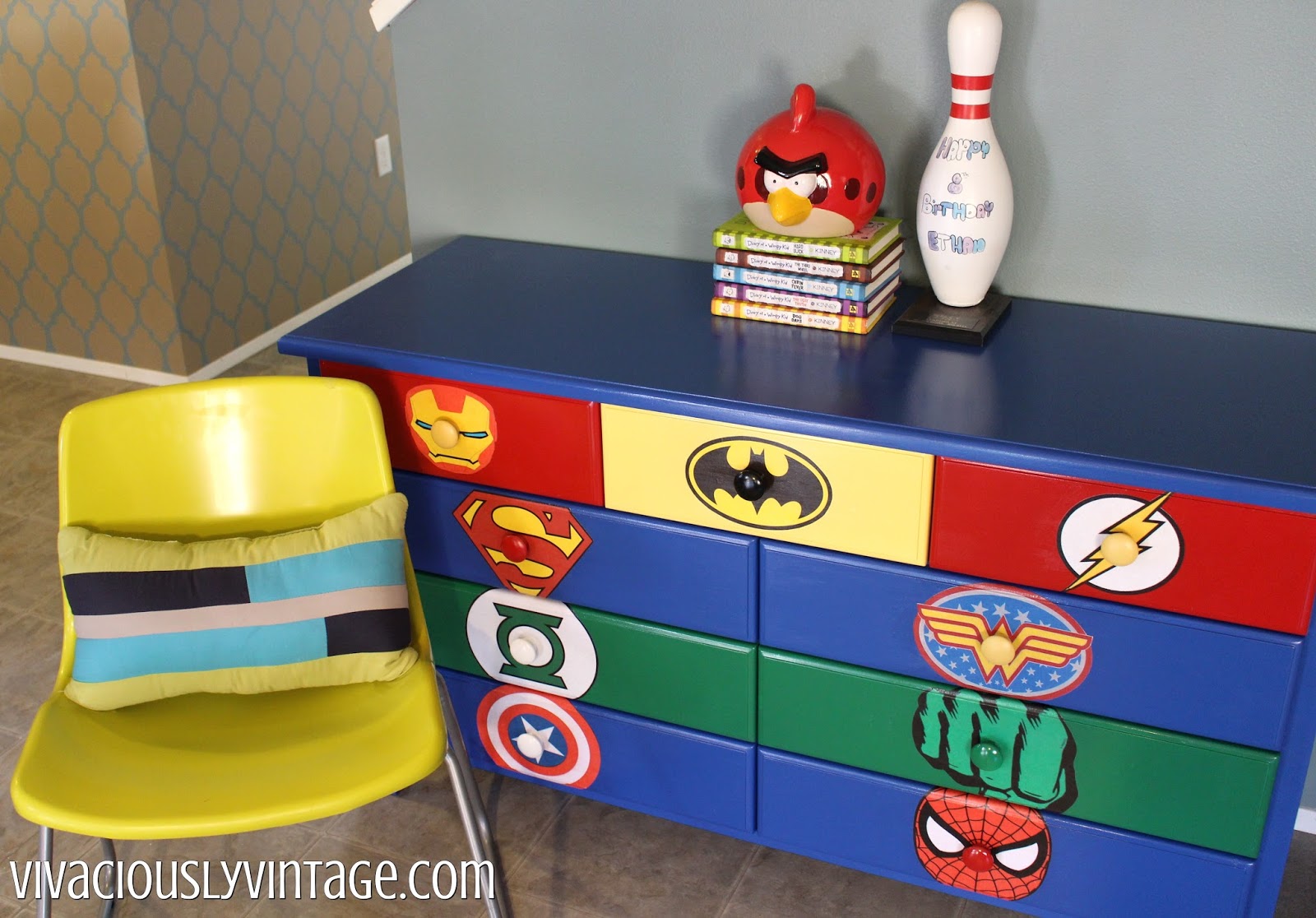 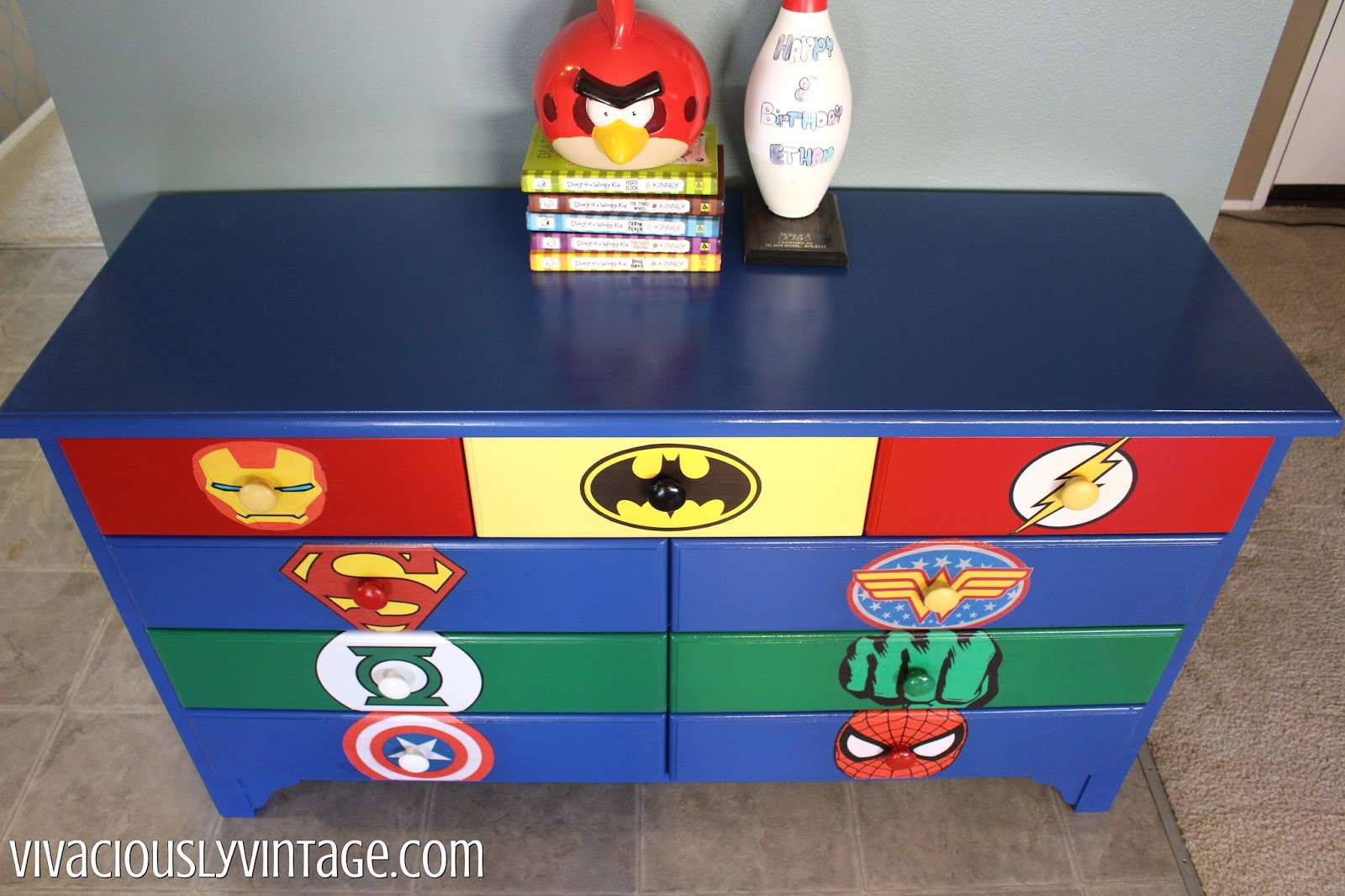 What do you think? I hope her kiddo loves it. Even Ethan talked about how awesome it was, and that he might have wanted one a few years ago. Haha, he's too cool for superheros...but he sure was pitching the idea of me making him a Minecraft one!!! lol I guess we'll have to see...

Update: Some of you were asking about the logos I used, so here they are! I used my silhouette studio software to print them since it has a grid option for me to get a more exact size. 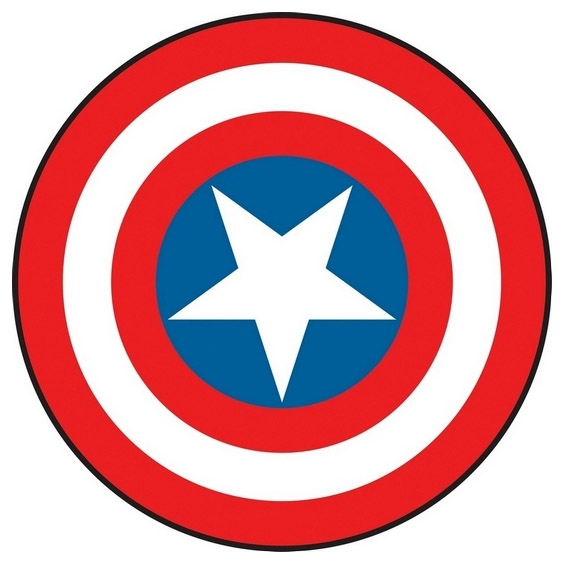 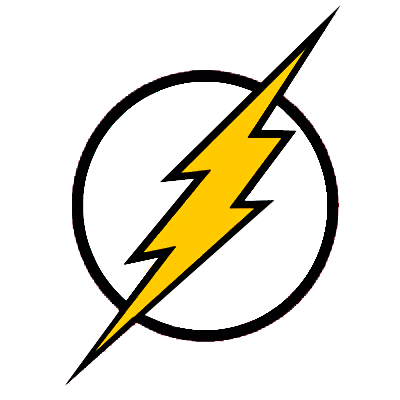 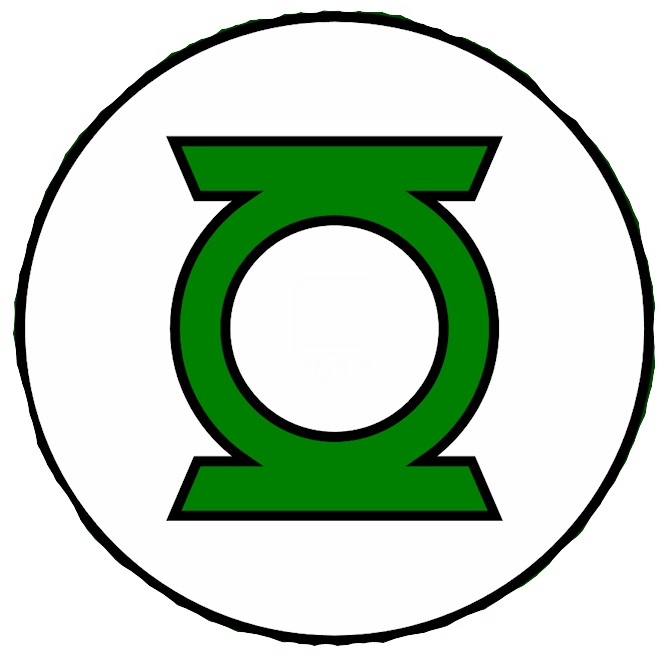 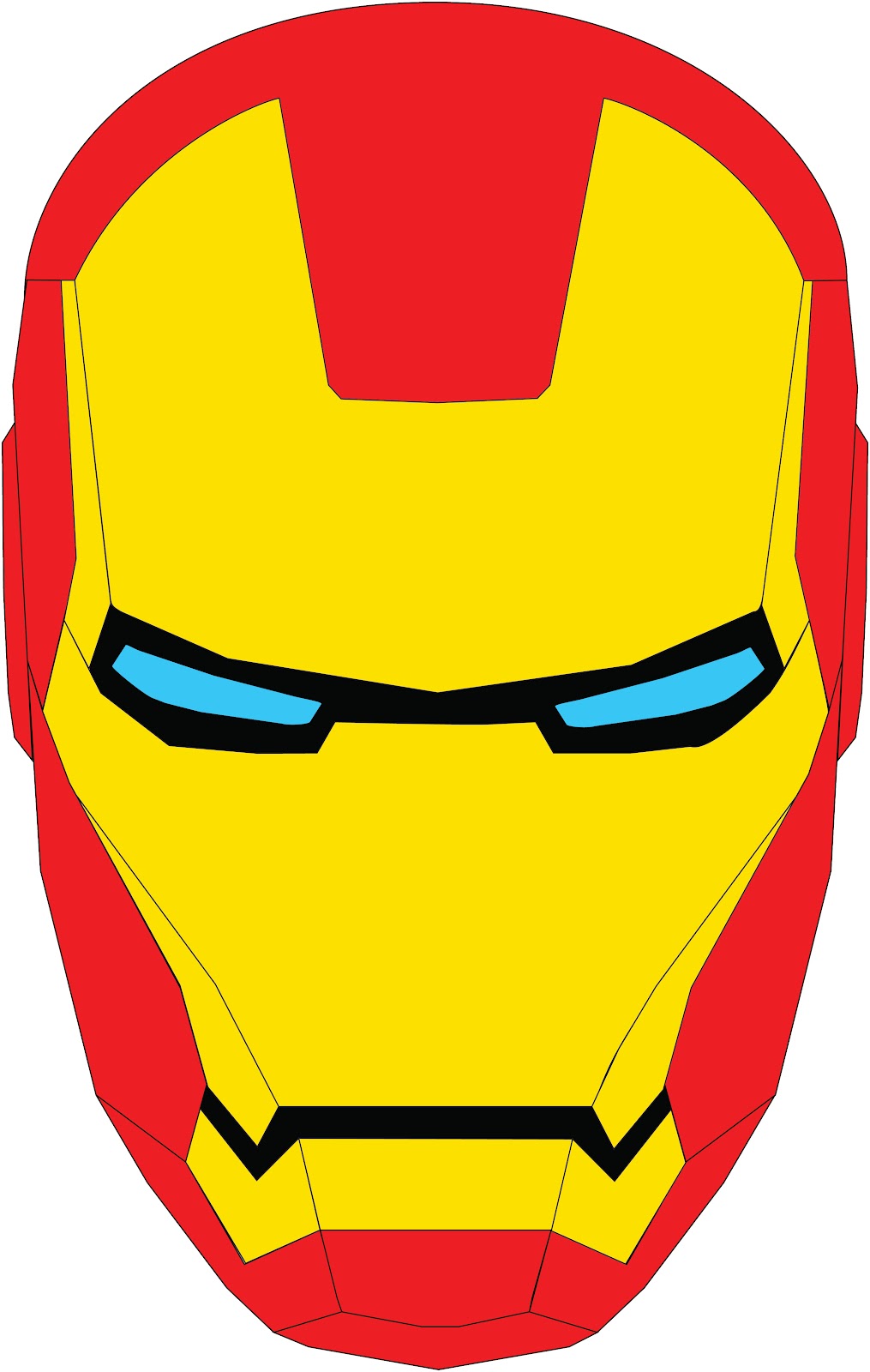 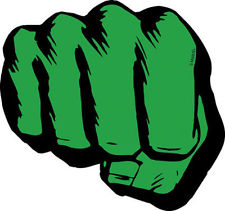 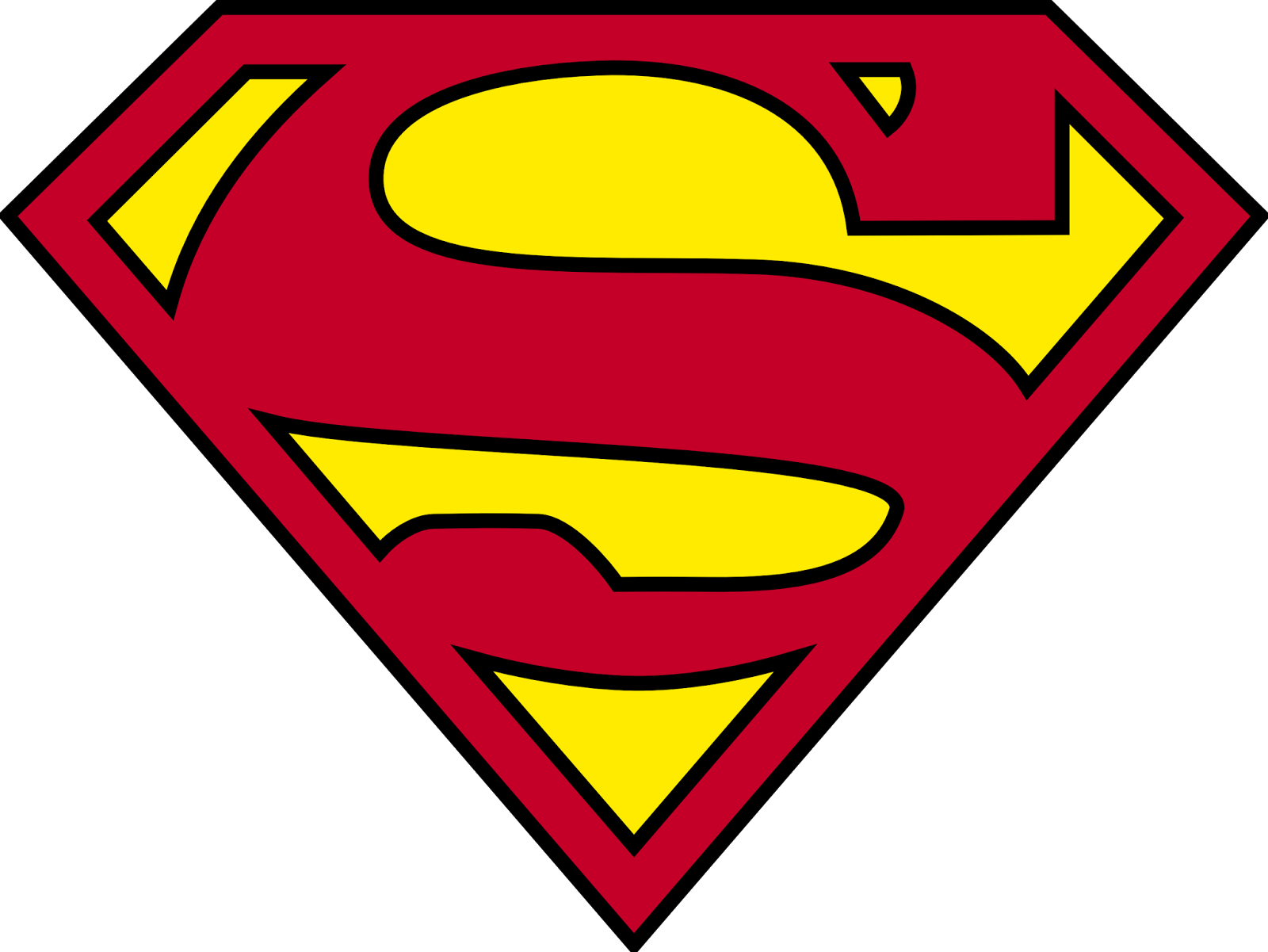