Today is my lady's FIRST BIRTHDAY! I'll get those photos done in the next few days before her birthday party. Until then...here she is from 7 to 11 months! If you missed them, here's the post about her birth and her first 6 months! ♥

March 2015 - 7 Months
Sweet lady is sitting up like a pro! She's an excellent eater, and instead of me shoving food into an open mouth - she's more purposeful about eating. She opens her mouth and leans forward for a bite! She hasn't met a food that she doesn't like yet! 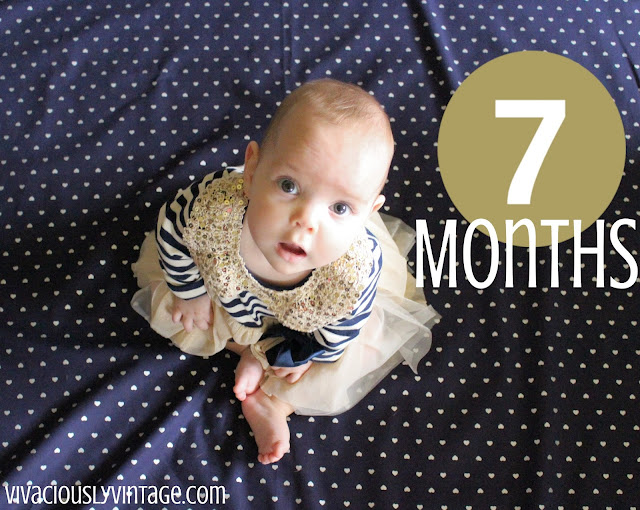 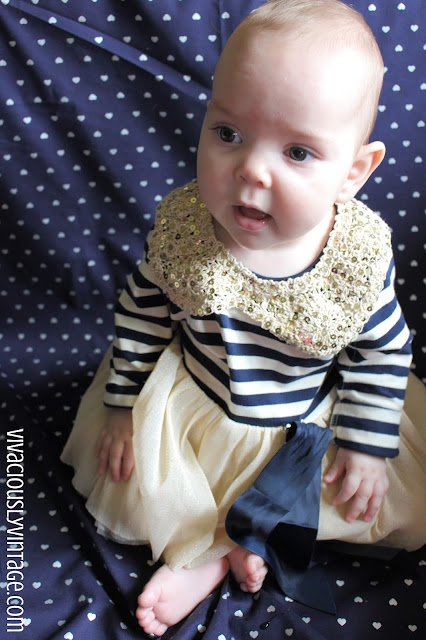 April 2015 - 8 Months
Both of her top teeth have cut through the gums! She has so many teeth now! I've started letting her have more solid foods. So far she's tried pancakes, nutrigrain bars, and potato salad. She loves it all! She's finally started rocking on her knees, getting ready to crawl! She loves to bee bop to Taylor Swift's "Shake it Off". She likes to play patty cake, but she's lazy about it! She'll just put her hands up and let me do all the claping! haha 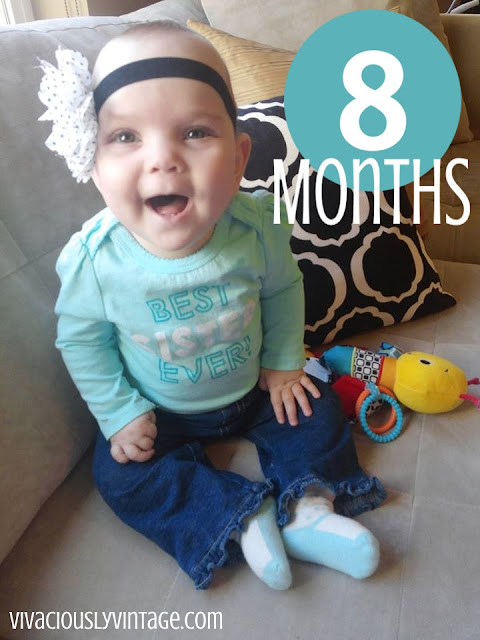 Ethan tries to act too cool for Reagan in public...but he is SOOOO sweet with her. A stolen moment...afterwards he promptly looked up telling me not to take pictures or post it on Facebook! Which, I totally did! ha 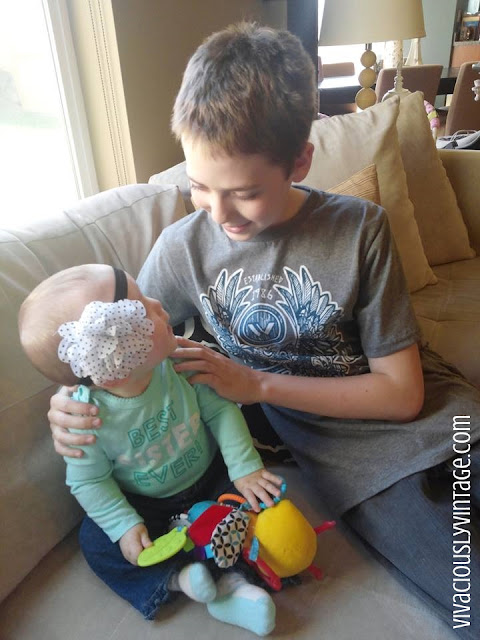 May 2015 - 9 Months
Sweet girl has FIVE teeth and 4 more on the way in, that I can see. She started really crawling on Mother's day! Luckily she hasn't become a daredevil explorer yet! She's 20 lbs and in the 75 percentile for weight! She has learned to be an active participant in "peek a boo". When I hide behind my book, she peers over to the side to find me! 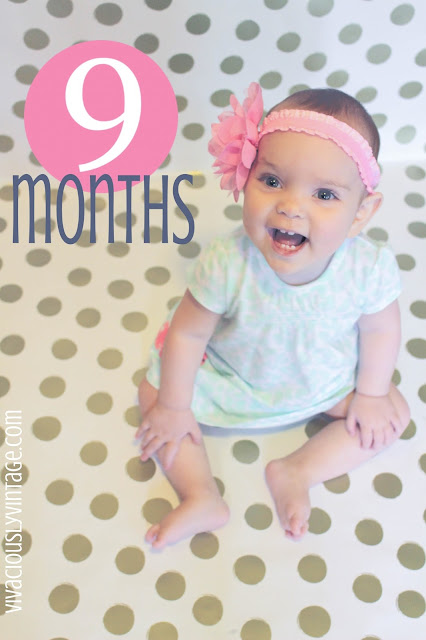 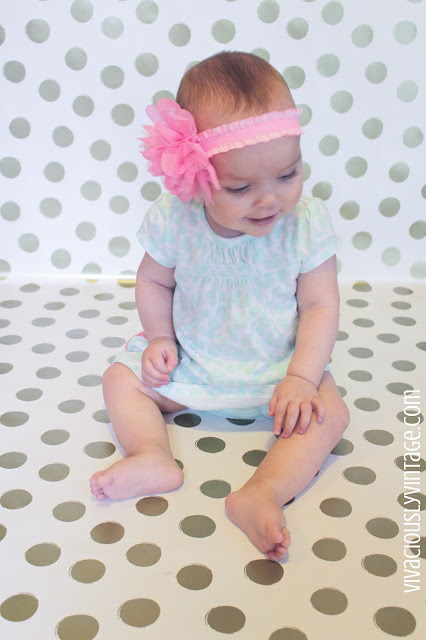 June 2015 - 10 Months
Sweet Reagan is crawling everywhere! She likes me to chase her, and she'll squeal and try to crawl away faster! Her balance and walking coordination while cruising around furniture are getting much better, but she's not quite there yet! She waves bye bye and talks so much now! She was fond of "Ba ba" forever, then finally threw a D in the mix. Not sure how that happened since she'd always "mmmmmmm" whenever she'd eat food. Her hair is getting longer with sweet little curlies in the back! 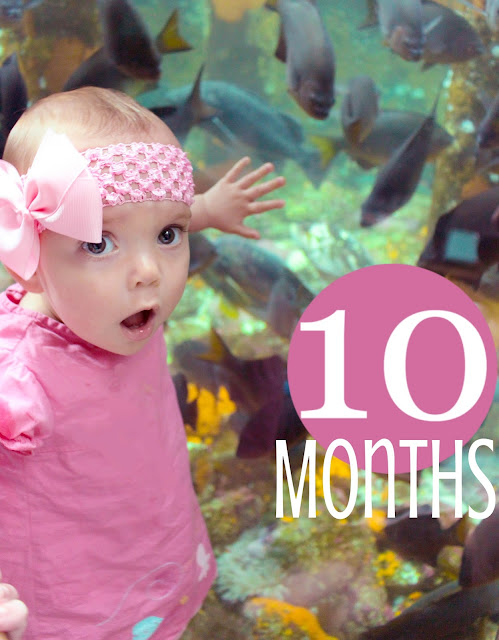 I took these pictures on our visit to the Seattle Aquarium when my mamma was visiting! They didn't quite turn out how I envisioned, but they are cute none the less! She loved the fishies, too! 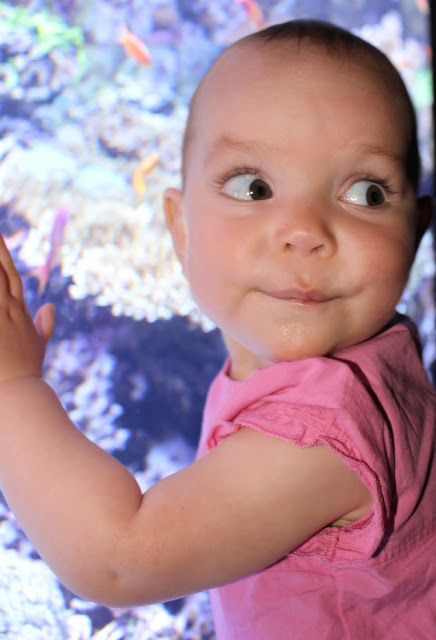 July 2015 - 11 Months
Reagan is very easily standing on her own for a while, but she has not taken any steps quite yet. She can clap now and has almost mastered drinking from a sippy cup. She would so much rather just have mommy milk though! I finally got her sleep trained! I still rock her to sleep for her to nap, but at night I'm able to just put her in her crib after our night time routine! She is finally sleeping through the night again! 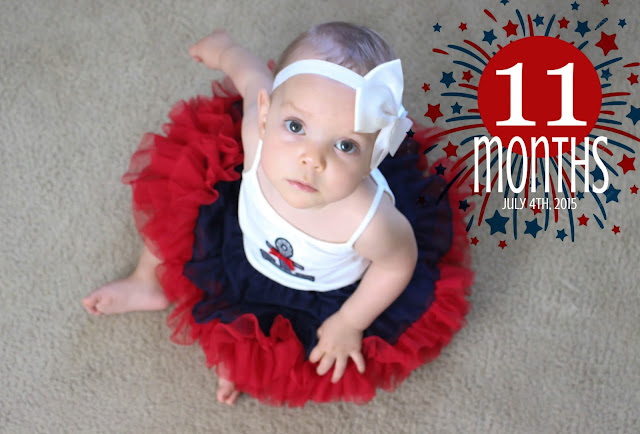 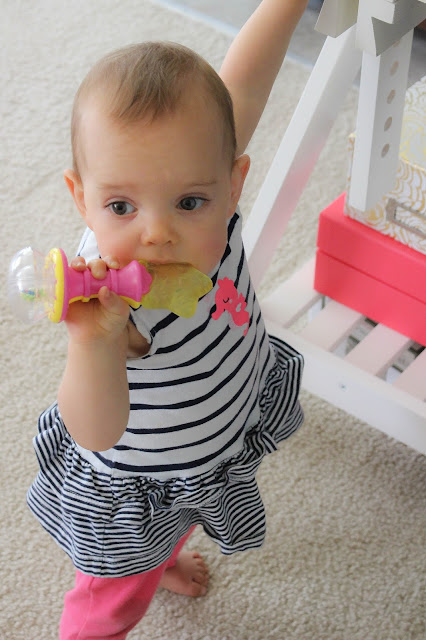 I love looking back over he pictures! I'll have her one year pictures done in the next few days! She has the CUUUUUTEST first birthday outfit!!!!